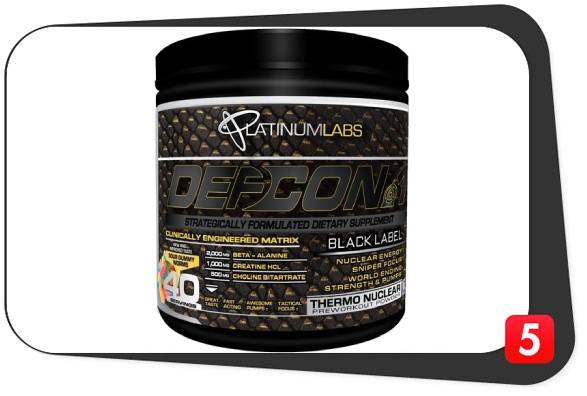 With a name like DefCon1, you’d think it’s geared for maximum readiness. I’d even be concerned for your body to approach nuclear war. A good pre-workout wants to navigate the former while avoiding the latter, preparing you just enough without causing you to explode.

Let’s see if DefCon1 by Platinum Labs does the trick.

Platinum Labs are company that markets to top-shelf consumers, stating their products are “end-to-end… GMP and FDA approved.” They ensure 100% ingredient transparency and single-batch testing on all products.

As one of the fastest growing supplement companies for sports nutrition, their DefCon1 pre-workout is definitely of interest.

DefCon1 brings us all kinds of ingredients to enhance your workout performance. Along with the usual B-Vitamins, there are some great additions that have proven to work in numerous clinical studies. Such as Beta-Alanine, L-Citrlline and L-Tyrosine.

However, one immediate red flag (in our honest opinion) is that DefCon1 contains what we consider to be an overload of stimulants – we’ll expand on this more further down in this section.

The supplement facts are as follows: 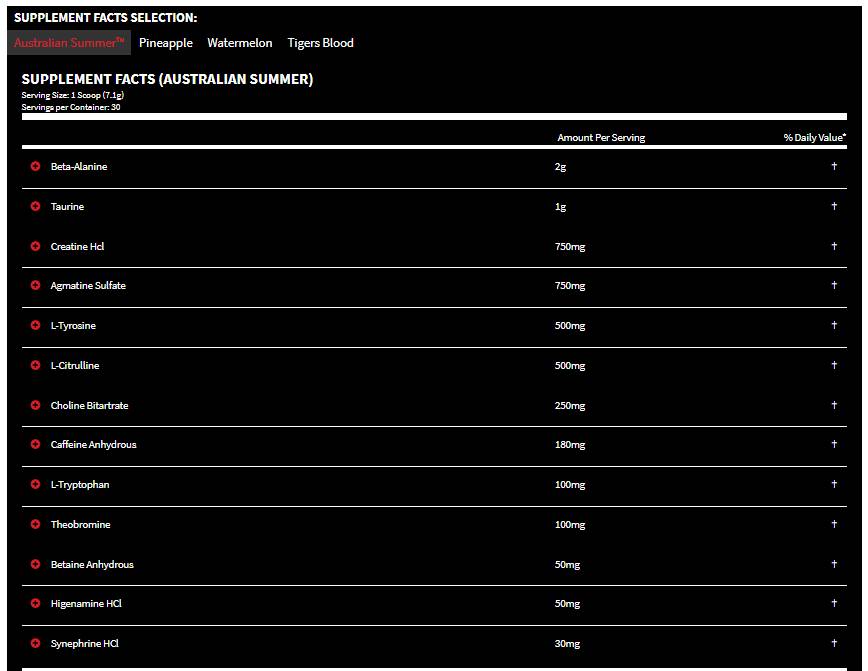 B vitamins play all kinds of intermediary roles within the human body. Vitamin B6 works to synthesize certain chemicals within the brain. It’s combination with caffeine and beta-alanine (all in this supplement) has been shown to improve both muscular endurance and reaction time. Vitamin B12 helps with red blood cell formation and facilitate energy production.

If you have a deficiency, supplementing with B12 can help bring you back to baseline, thus improving workout performance. But most of us are already good on the vitamin B12 front due to the food we eat.

If you do have a vitamin deficiency, your best option is to take a quality multivitamin. We don’t really consider B-Vitamins to be key components of pre-workouts.

Beta alanine works to buffer pH levels within the muscle cellular environment. If lactic acid builds up too much, your performance decreases drastically in response. Beta alanine combines with histidine in your body to produce carnitine, a powerful pH buffer. As histidine levels tend to be high, beta alanine is the limiting factor. Loading up with beta alanine therefore leads to higher stored amounts of carnitine, and longer efforts at high intensity before fatigue.

However, most of the research on beta alanine requires a loading phase. It’s not a fast-acting supplement. According to the International Society of Sports Nutrition’s position statement, four weeks of 4-6g daily beta alanine supplementation is required for effective intracellular pH effects. DefCon1 only features 2 mg, and only with daily supplementation, it’ll take four weeks to be useful.

Taurine is an amino acid involved in central nervous system function, skeletal muscle development, cardiovascular activity, and eye health. It’s an interesting choice for a pre-workout, however, as its effects tend more toward recovery. One mouse study found that taurine modulates activity of GABA, an inhibitory neurotransmitter. That means it actually blocks electric signals in the brain, keeping us from getting overexcited. It’s possible that Platinum Labs added this element to balance out the effects of stimulants.

Agmatine targets neurotransmitter receptors and modulates nitric oxide synthesis. As a metabolite of arginine, it’s a way to get the bioactivity of internal arginine breakdown without worrying about the lack of absorption. Therefore, it can increase vasodilation, lower blood pressure, and stimulate blood flow to your muscles.

It can also benefit cognitive function. Thus, it’s been shown to decrease both neuropathic pain and depression.

This is an interesting stylistic choice for DefCon1. While most companies will include the more evidence-based creatine monohydrate, they opted for a different route. Creatine itself helps fuel the phosphagen system for short-burst of intense activity, so in general, it’s a good idea. Creatine HCl is thought to be more water-soluble, and therefore negate some of the bloating, puffy side effects of monohydrate. But there’s simply not enough research on it. That’s not to say that won’t change, but we need more evidence. Meanwhile, creatine monohydrate has proven effective over and over again as a pre-workout.

Rather than a metabolite of arginine, L-citrulline is its precursor. When called upon, it can transform into arginine within your kidneys, subsequently affecting nitric oxide and blood flow. Alone, research has determined citrulline supplementation over a week elevates cycling performance. It can also help you maximize the use of BCAAs during training. Studies have shown that this combination improves time-trials in running and counteracts fatigue in taekwondo athletes.

There’s only one issue – experts recommend between 6-8g of citrulline an hour before exercise. DefCon1 only includes 500mg per serving.

Another amino acid, tyrosine can elevate catecholamine content within your brain. As a reminder, catecholamines help us respond to stressful situations. The main suspects are epinephrine (adrenaline), norepinephrine, and dopamine. When preparing for a huge gym session, it makes sense that you’d want these neurotransmitters at the ready. However, it’s more effective as a nootropic, as its benefits largely target cognition.

Choline bitartrate combines a salt with choline to increase bioavailability. When present, choline is used to synthesize phosphatidylcholine, a structural component of brain cell membranes. While it can be produced in the body, we need choline from dietary sources to remain healthy. Deficiency causes muscle damage and poor cognitive function, which is why supplementation shows improvement in memory.

A well-balanced diet featuring eggs, beans, fish, chicken, and other legumes provides adequate choline, however. If anything, it’s conditionally essential in cases of dementia or aging, but it’s not necessarily beneficial as a pre-workout.

180 milligrams of caffeine looks like three espresso shots – pretty excessive for most people. Remember that with this product, you’ll feel the effects of all this caffeine hit you at once.

The positive is for people who drink upwards of 5+ cups of coffee per day. However, for those that don’t drink bucket loads of caffeinated products, their tolerance won’t be as high – meaning they’ll be at risk from suffering jittery side effects.

We personally like to keep caffeine separate in supplements.

Theobromine is a compound found in Guarana and Cocoa, stimulating our bodies similar to caffeine. It works by inhibiting phosphodiesterases and blocking adenosine receptors. Both of these responses lower blood pressure and alleviate fatigue, respectively. Unfortunately, there’s not a ton of research on the proper dosage in a pre-workout to elevate performance.

Tryptophan is most notoriously associated with sleepiness after a giant turkey roast. (Not to mention the general exhaustion from stuffing ourselves full). Which is why it’s an odd choice for a pre-workout, but let’s try to rationalize its inclusion.

Tryptophan acts as a precursor to serotonin, aka the “happiness molecule”. Theoretically, if you’re happier, you might attack your gym session a little harder. However, this is all conjecture, and there’s not enough research proving tryptophan to be an effective pre-workout.

Another dehydrated molecule, betaine anhydrous naturally occurs in beets. Supplement companies claim it might decrease fatigue to enhance exercise endurance. While one study did confirm its association with greater lean muscle mass and bench press performance compared to placebo – it only increased arm circumference, and has mixed results across microcycles in bench. Furthermore, it’s a metabolite of choline, and DefCon1 already features choline. It’s a pretty unnecessary inclusion.

Pre-workouts tout higenamine for its fat-burning benefits. Its effects are similar to that of ephedrine as a beta-adrenergic agonist, which established its benefit to fight asthma. Despite claims of it being a fat burner, there haven’t been any human studies that prove this. Additionally, it’s been added to the FDA’s Dietary Supplement Advisory list this year, which doesn’t make us feel safe taking it.

This is just another way for companies to disguise a banned substance – bitter orange peel. It’s another ingredient similar to ephedra, which has been banned in the US and UK, so not a great addition to this pre-workout. 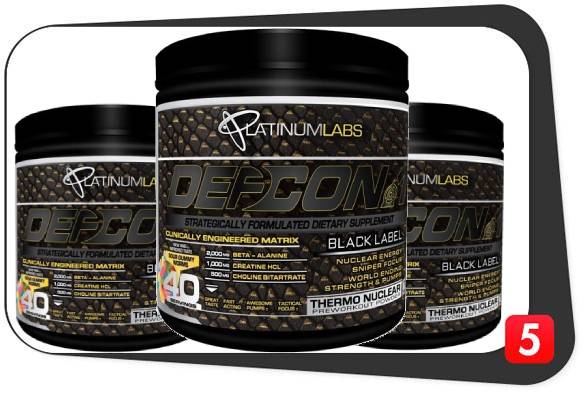 Things aren’t looking great for DefCon1. To start with a positive, it does contain the right amount of caffeine. But you’d be better off spending your money at Starbucks, as that’s where the positives end.

Right off the bat – DefCon1 contains one banned and one advisory ingredient. The inclusion of citrulline is good in theory, but it’s probably not going to have the desired effect at that dose. This could possibly be augmented by the inclusion of agmatine sulfate, but that hasn’t been tested at length in the lab.

In the same vein, creatine would have been a great option. It’s a pretty vital ingredient to any great pre-workout, but DefCon1 chose a version that’s not backed by research. The rest of the ingredient list is either ineffective, or works better as a different supplement (fat burner, nootropic, sleep aid, etc).

DefCon1 probably works well as a stimulant, but it’s not worth the risk to your health in our opinion. Otherwise, there aren’t a lot of benefits.

Bodybuilders, from elite to novice, seem to be the market for this kind of stimulant-based pre-workout.  Generally, this population has built up a bit of a base for stimulants and “the pump”, as it’s part of the culture. Field athletes or general population exercisers probably won’t like its effects, and may run the risk of health issues.

Potential Side effects of DefCon1

The main red flag that might cause users side effects is the big 180mg dosage of caffeine (alongside the inclusion of other stimulants such as synephrine). Platinum Labs aren’t to blame here; most pre-workouts come packed with caffeine so over 100mg caffeine per serving has become ‘normal’ and some can’t figure out why they suffer jitters…

Since side effects from stimulant overloads are dependant on tolerance, you might be okay. However, we prefer consuming caffeine separately to pre-workouts so that we can keep an eye on our consumption to stay safe (just out honest, personal preference).

Known side effects of individual and combined ingredients include:

In our opinion, it’s a bit pricey for what you get. Sure, there’s a relatively good stimulant profile, if you’re looking for that sort of thing – and some people are!

But there are other, better options that provide energy while adding vasodilation and creatine monohydrate that actually work.

Furthermore, it’s not a choice for someone who values purity and lack of banned substances. Our final word is to do your research, and spend your money elsewhere.