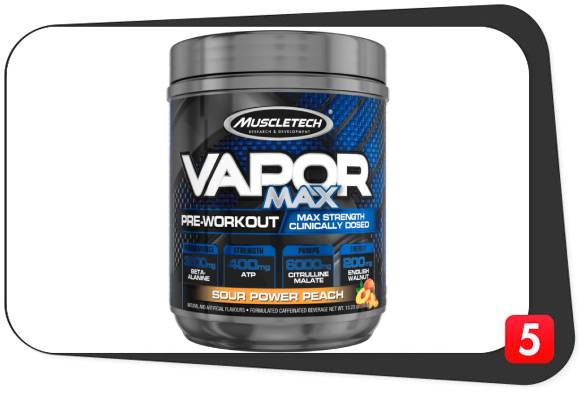 MuscleTech is a Canadian supplement company that is internationally recognized as one of the best supplement companies around. According to its website, MuscleTech has been the number one selling supplement in America since 1995, known for its Nitro-Tech and Cell-Tech products in particular.

Vapor Max promises to be a “hard-hitting pre-workout” that gives instant energy. MuscleTech claims that Vapor Max can increase blood flow and vascularity for a superior muscle pump, it can also enhance muscular endurance, extreme energy, and increase strength.

Vapor Max seems to offer similar benefits to almost any pre-workout, so the question is how effective is it? Standing out from the crowd is difficult for pre-workout supplements as there is so much competition, can Vapor Max manage it?

Vapor Max is literally stuffed with ingredients. There is a LOT of caffeine, a lot of L-Citrulline Malate, a large dosage of Beta-alanine, as well as Adenosine ‘5’-triphosphate disodium, choline, and several other lesser-known ingredients.

Serving Size: 14g (one scoop of powder mixed with 800ml of water)

There don’t appear to be any written directions for use on the packaging for Vapor Max, or if there are then they’re really hard to find. This is probably because MuscleTech have faith that their customers understand how to take a pre-workout. You take one scoop, mixed with 800ml of water before your workout.

If you are training for between 45 minutes and an hour you would probably want to take it about 15-20 minutes before training, as it will take a while for the caffeine in your system to be effective. If you have a low tolerance to caffeine, then you can probably take it immediately before your warmup.

Now that you know how to take Vapor Max by MuscleTech, and you know what ingredients are present within it, let’s take a look at what these ingredients are and how they work. As mentioned previously, there are a lot of ingredients here, so we will only look at the most effective ones.

Citrulline Malate is citrulline that has been bound to malate (an organic salt), it is often used in scientific studies as it is an effective way to increase arginine levels. Citrulline malate has been shown to reduce fatigue and increase endurance performance.

It may also increase anaerobic performance and reduce muscle soreness [1]. As you can see, it is a great choice for a pre-workout supplement.

This modified amino acid is one of the most popular pre-workout ingredients around, it can increase muscular endurance, reduce fatigue, and may even help lower body fat levels. A 2011 study on Collegiate wrestlers and football players found that those taking beta-alanine lost 2.1lbs of fat on average compared to 1.1lb for the placebo [2].

Not a huge difference, but every little helps. While Beta-alanine is very safe, it does have an irritating side-effect when taken in large dosages. Paresthesia is a condition where your skin becomes itchy and can be very annoying.

Dosages above 800-1000mg can cause paresthesia [3] and Vapor Max contains 3.2g! Other pre-workouts (such as SPORT Pre-workout by Performance Lab) get around this by using CarnoSyn, a beta-alanine supplement ingredient that provides the same benefits but at much lower doses.

The absolute boss of pre-workout ingredients, caffeine is the most researched supplement ingredient around. But while it has many benefits (increased strength, increased power, reduced fatigue, fat-burning, as well as cognitive benefits) caffeine can also cause some issues. For starters, the dosage is always an issue.

Much of the research around caffeine involves very high doses, 500mg or more for performance benefits. This can cause a lot of side effects; it can also lead to you developing a very high tolerance (meaning that you would need larger and larger doses to see the same effect).

Vapor Max contains 250mg of caffeine, which is enough to see some fat-burning benefits, but it is not enough for the majority of performance-related benefits to occur.

A common nootropic ingredient, choline is becoming more and more popular as a pre-workout ingredient thanks to some research showing that it may improve performance. While there is a lot of excitement, no peer-reviewed studies have been able to find enough evidence that it can reduce fatigue, increase exercise capacity, or improve anaerobic performance [4].

Is English Walnut extract a common ingredient? No. Does MuscleTech give any indication as to why it has included it in Vapor Max? No. After some further research we have found that English Walnut extract refers to the fruit (walnut) that grows on the tree rather than the tree bark (which is a completely different ingredient entirely). Walnut extract is believed to reduce inflammation which may explain why it is present in this supplement, but there is little to no evidence that it does anything.

Commonly combined with caffeine as it works in a similar way, theacrine and caffeine may be effective at reducing fatigue and improving performance. 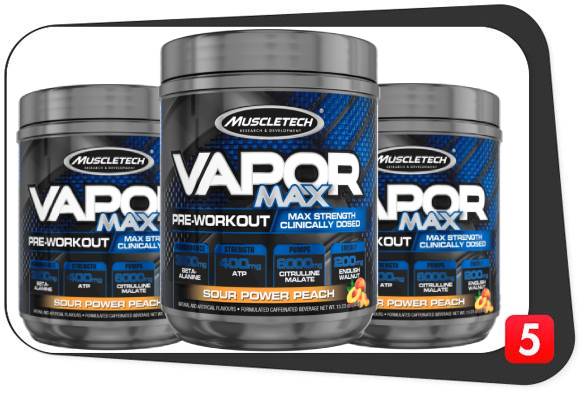 See Your Best Options In Our
– Best 5 Pre-Workouts Page –

There are definitely benefits associated with taking MuscleTech Vapor Max. The caffeine and theacrine will help to reduce fatigue and boost performance in the gym. Caffeine works by reducing your body’s ability to feel pain, meaning that you can train harder and for longer while having a lower rate of perceived exertion. Caffeine is taken by almost every athlete around, and most bodybuilders. This is because it absolutely works.

Though, you should consider cycling caffeine. Meaning that you use it for a certain period of time and then avoid it for a few weeks to lower your tolerance. Finding a caffeine-free pre-workout to take during this time would create excellent results.

Another benefit from taking Vapor Max is that your cognitive ability will improve. Many of the ingredients such as caffeine, beta-alanine, citrulline malate, theacrine, and choline have been shown to reduce fatigue (both physical and mental) this can improve decision making, your ability to concentrate, and your reaction time.

There may also be a small fat-burning benefit. Caffeine can certainly help to burn fat, but beta-alanine may also help. By allowing you to train harder and for longer, the entire supplement may indirectly allow you to burn more fat by helping you increase your calories expended and create a larger deficit.

Vapor Max does not appear to have a specific target, it is marketed to both men and women, and nothing about the package is particularly aimed at the young or the old. Pre-workout supplements are beneficial to anyone who wants to exercise, so anybody could take it.

Any Potential Vapor Max Side Effects?

Most of the side effects would be down to the caffeine content of this supplement. Caffeine can cause headaches, nausea, heart palpitations, and insomnia if taken later at night. However, if you manage your caffeine intake (cycling it with non-stim pre-workouts and lowering caffeine from coffee and tea) then you should see little to no side effects (as well as many benefits).

The beta-alanine content will also cause paresthesia in many people due to the high dosage in Vapor Max. This is completely harmless (though irritating for many) and in fact, some people actually enjoy the feeling, so it is not a particularly bad side effect. But definitely worth mentioning.

See Your Best Options In Our
– Best 5 Pre-Workouts Page –

MuscleTech Vapor Max is currently only available to buy in New Zealand and Australia, and due to it being produced in Australia it is very expensive to ship to New Zealand ($24.95 just to ship it to NZ). 25 servings costs $74.95 (AUD) which is about $50 (USD). That is a lot!

Bear in mind that you also have to add the shipping cost of $10 (AUD) which means that a single serving is almost $3 (USD). If you are a New Zealand lifter then you’re going to be paying even more per serving, unless you are prepared to purchase in bulk.

As far as we are aware, it is very difficult to purchase MuscleTech Vapor Max outside of these two countries. MuscleTech do sell Vapor One in the U.S., another of its pre-workouts, but the two supplements are actually very different. Vapor One contains more caffeine, uses a different form of Citrulline, and contains creatine monohydrate. As well as several other differences.

If you did want to purchase Vapor Max and lived outside of Australia and New Zealand then you would have to pay a large amount in shipping, and may also need to double check the ingredients list to make sure that they are all legal in your country (U.S. customers should be fine).

Vapor Max by MuscleTech is a pretty good pre-workout, it contains a lot of effective evidence-based ingredients, and they are all effectively dosed. If you have not taken a caffeine-based pre-workout before then you should see a huge increase in energy and a big improvement in your gym performances.

However, not everyone wants a pre-workout that is filled with caffeine. If you are looking for a non-stimulatory pre-workout then this is definitely not the supplement for you.

The biggest issue with Vapor Max is not to do with its ingredients list, the biggest issue is the price and availability. Our hearts go out to New Zealand gym-goers because of the expense involved. Even the Aussie lifters are spending way too much on a pre-workout supplement. There are many products out there that are less than a $ per serving, whereas this supplement works out at almost $3!

If money is no object, then this is a great pre-workout supplement. You’re going to really see some good results, and many of the ingredients have been cleverly chosen. But Vapor Max is not good value for money, for the price it would need to stand out as something very special.

But it doesn’t, it’s fine, it will work, that’s about it. There are other supplements out there that will deliver similar (and possibly even better) results for a lower price.