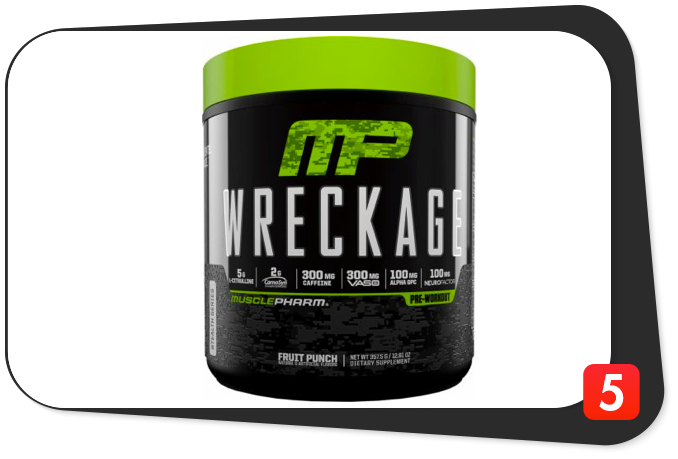 When was the last time you purchased a comprehensive pre-workout supplement without the dreaded crash effect? We know – it can be a pipe dream. Well, this MusclePharm Wreckage review proves it can be a reality. It’ll make any serious athlete or bodybuilder look forward to his workouts day in and day out.

MusclePharm Wreckage “is an elite pre-workout formula designed for our most experienced and seasoned athletes,” per the manufacturer’s official website. Formula notes:

We hope you’ve checked out our B5 pre-workout reviews. These are some of the best the bodybuilding supplement industry offers (if you want the creme de la creme, check out our Best Pre-Workout Supplements page).

Some manufacturers concoct their pre-workouts with bodybuilders and serious lifters in mind. One of those which first comes to mind is Animal Fury, the so-called “Pre-Workout Powder Keg.” While it isn’t perfect, it should jack you up for your workouts.

You can also give ENGN SHRED a shot. This pre-workout has generous servings of B vitamins, beta-alanine, CLA, and l-carnitine l-tartrate. We feel it’ll enhanced your exercise performance to no end.

Let’s see if MusclePharm Wreckage can trump both of them. The manufacturer describes this product as “an elite pre-workout formula designed for our most experienced and seasoned athletes,” per its official website.

One look at MusclePharm Wreckage’s ingredients list, we get the feeling it will exceed every hard-training athlete’s expectations.

This pre-workout’s three blends clearly defines its objectives. You want that in any bodybuilding supplement. It makes life easier for customers. For that, we give props to the folks at MusclePharm. 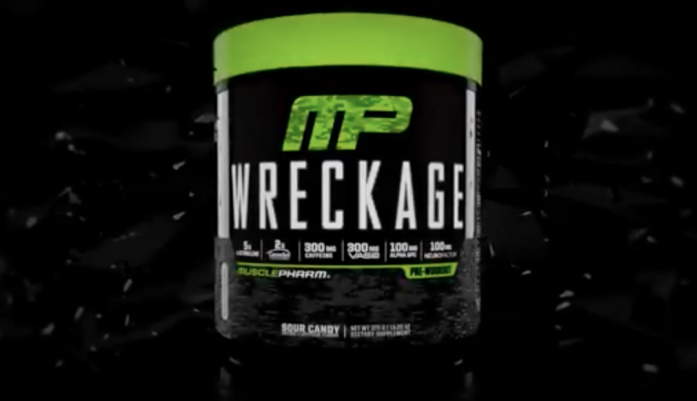 Conquer your workouts with MusclePharm Wreckage.

This blend takes up 5.35 grams per 14.3-gram serving. Leading the charge are five grams of l-citrulline per serving.

This amino acid is a precursor of the powerful vasodilator l-arginine. When you consume l-citrulline, expect improved blood flow. This, in turn, results in increased muscle pumps, healthier blood pressure levels, and improved nutrient delivery.

It also turns out watermelon juice (a rich source of l-citrulline) helps keep muscle soreness at bay. In fact, consuming l-citrulline helps ward off the dreaded delayed onset muscle soreness (DOMS), per The Journal of Agricultural and Food Chemistry (via ACS.org).

On that note, we’re stoked MusclePharm Wreckage has l-citrulline, a proven pre-workout ingredient. We’re confident it will help you achieve your fitness goals.

This blend’s second component is 300 milligrams of Vaso6 (green tea extract [leaf]) per scoop. If you’re not content with l-citrulline’s vasodilation prowess, Vaso6 should convince you.

According to Compound Solutions’ official website (Vaso6’s manufacturer), this “is a natural and patented ingredient for nitric oxide production and blood flow, clinically proven to increase vasodilation by 50 percent.” The company says it will produce this effect at a dosage of 300 milligrams – exactly what’s in MusclePharm Wreckage.

Vaso6 has other impressive pre-workout benefits, per its official website:

If you’re a hard-training athlete, you will love these. Whenever an ingredient gets your blood flowing, you are ready to conquer the competition. MusclePharm Wreckage’s potent double dose of l-citrulline and Vaso6 will do just that for you.

The good news: Vaso6 has no reported side effects. Remember, this is an ingredient derived from green tea extract. Last time we heard, green tea extract has no adverse effects on the body. In fact, it’s one of the healthiest beverages around. Only a select few pre-workouts have Vaso6, so take advantage.

According to the ingredient’s official website, AstraGin is an “absorption-enhancing ingredient” which is “proven in a dozen pre-clinical studies to support amino acid, vitamin, and mineral absorption.”

Long story short, AstraGin improves MusclePharm Wreckage’s bioavailability for better overall results. It’s an invaluable addition to this pre-workout supplement. We give it a thumbs up.

If you want intense muscle pumps and then some, Muscle Pharm Wreckage’s Intense Pump & Nutrient Absorption blend delivers on all fronts.

Ramping up energy levels and warding off lethargy are two of the main reasons why customers purchase pre-workouts. At first glance, we feel MusclePharm Wreckage’s Endurance blend seems up to the daunting task.

First up is two grams of CarnoSyn beta-alanine per 14.3-gram scoop. This is one of the most popular pre-workout ingredients on the market.

Beta-alanine is a naturally-occurring beta amino acid which buffers muscle carnosine levels. When this happens, you will increase your work capacity and delay the onset of fatigue better than ever before. We’re stoked it’s in MusclePharm Wreckage.

This pre-workout product also has one gram of taurine per serving. We can’t get enough of this amino acid’s versatility. Check out its impressive array of benefits:

You can achieve a plethora of fitness goals when you supplement with taurine. Its ability to increase testosterone levels results in more muscle mass and strength. You will be a better athlete when you take taurine. Its inclusion in MusclePharm Wreckage is awesome.

While caffeine has its upsides, it also has downsides – it may cause a spike-crash effect, jitters, palpitations, and sleeplessness. MusclePharm Wreckage’s caffeine content is equal to two to three cups of brewed coffee. If you’re sensitive to caffeine, please steer clear of this supplement.

MusclePharm Wreckage’s Energy & Endurance blend features three proven pre-workout ingredients (although caffeine is a double-edged sword). We’re certain it will help perk you up and help you crank out more reps at the gym.

Smart pre-workout supplements put a premium not only on physical endurance, but mental focus as well. MusclePharm Wreckage’s Neuro Focus blend’s four components should help keep you at the top of your game.

Leading the charge is 500 milligrams of tyrosine per 14.3-gram scoop. You can find this non-essential amino acid in many nootropics. It is a precursor of the neurotransmitters epinephrine, dopamine, and norepinephrine.

Some pre-workouts such as Animal Fury and Mr. Hyde Cutz have l-tyrosine. We’re happy MusclePharm Wreckage has it, too. It’ll give you that much-needed mental boost for the toughest workouts.

According to Dr. Simon N. Young of the Department of Psychiatry at McGill University in Montreal, Quebec, Canada (via NCBI.NLM.NIH.gov), “L-tyrosine prevents some of the cognitive decline in response to physical stressors.”

Next up is a less common pre-workout ingredient – 100 milligrams of alpha glycerylphosphorylcholine (GPC) per serving. Simply known as alpha GPC, this ingredient is a source of choline. The latter is a precursor of the neurotransmitter acetylcholine, which plays a key role in muscle contractions.

Fitness experts believe higher acetylcholine levels in the brain result in increased focus. Not only that, but they also say alpha GPC helps increase human growth hormone (HGH) levels. We think this is a fantastic bonus for bodybuilders and lifters.

You can find l-theanine in other pre-workout products such as MuscleTech VaporX5 RIPPED and 4 Gauge. Far too many pre-workouts keep you wired past bedtime. L-theanine helps put a stop to that.

MusclePharm Wreckage’s final key ingredient is 100 milligrams of NeuroFactor (whole coffee fruit concentrate)(Coffee arabica) per serving. Simply put, this is Arabic coffee. It has similar benefits to caffeine anhydrous. The additional caffeine punch should help keep you on our toes in the gym.

With that, MusclePharm Wreckage’s caffeine content is now equal to three to four cups of brewed coffee. It bears repeating: if you’re sensitive to caffeine, please skip this one.

All in all, this product’s Neuro Focus blend will fire you up mentally without going overboard. The inclusion of l-theanine helps keep any extreme stimulatory effects in check. You will feel revved up for your training sessions from here on out.

The manufacturer dubbed MuslcePharm Wreckage as “an elite pre-workout formula designed for our most experienced and seasoned athletes,” per its official website. We say that description is spot on. It’s elite from top to bottom. Hard-training athletes will benefit to no end.

When we saw MusclePharm Wreckage has five grams of l-citrulline per serving, we got the feeling the other components will complement it perfectly. We were right – throw in 300 milligrams of Vaso6 per scoop, you will experience more insane muscle pumps and vascularity.

Feeling sluggish? Well, the Energy & Endurance Blend will jack you up, for sure. A combined 3.3 grams of Carnosyn beta-alanine, taurine, and caffeine anhydrous per serving will snap you out of your funk. We’re talking about time-tested pre-workout ingredients here. You can’t go wrong with these.

Like we said, smart pre-workout formulations not only perk you up physically, but mentally as well. That is what the Neuro Focus blend will do for you. A combined 800 milligrams of tyrosine, alpha GPC, l-theanine, and NeuroFactor Arabian coffee per scoop should do the trick.

We love the inclusion of l-theanine. Far too many pre-workouts leave you wired well past midnight. Well, this one won’t (provided you follow the prescribed dosage). L-theanine helps offset the effects of caffeine. It’s a lifesaver in every sense of the word.

On the other hand, when you include 50 milligrams of AstraGin per serving to improve nutrient bioavailability, your results will soar. Its the proverbial cherry on top.

It’s clear from the get-go you will increase your muscle pumps, energy, and focus when you supplement with MusclePharm Wreckage. The different blends make this clear. We’re sure you will enjoy these benefits.

We also like this product’s low calorie, sodium, and carb content. Plus, we tip our hats off to the manufacturer for excellent transparency – it reveals all of the ingredient amounts. Thumbs up.

MusclePharm Wreckage also enjoys a tremendous reputation among consumers. They love it for its benefits, awesome taste, and value for money. Plus, they say it’s one of the few pre-workouts which has no crash effect. We agree with them on all fronts.

MusclePharm Wreckage has plenty of upside. However, it has a few downsides. The first one is the caffeine content – it has a combined 400 milligrams of caffeine per serving. If you’re sensitive to this ingredient, you’re better off buying a different pre-workout supplement.

Finally, it also has sucralose (a.k.a. Splenda), an artificial sweetener with several side effects. The manufacturer could have used stevia instead. It’s a natural sweetener which helps ward off obesity.

Despite these few chinks, MusclePharm Wreckage is one of the most impressive and complete pre-workout supplements on the market. If you want insane pumps and long-lasting energy without the nasty crash effect, this is your go-to.

“Our team fine tuned precise inclusions of the safest, most clinically-studied and cutting edge ingredients to enhance training performance and maximize playmaking ability,” per the product’s official website.

The manufacturer intended MusclePharm Wreckage for “experienced and seasoned athletes” who are at least 18 years of age, per its official website. Among their fitness goals include increased energy, endurance, vascularity, muscle pumps, and focus.

MusclePharm Wreckage contains 400 milligrams of caffeine, an ingredient which may cause nervousness, headaches, muscular tension, and the like.

This pre-workout also contains sucralose (a.k.a. Splenda), an artificial sweetener which may increase weight gain.

If these, or any other ingredient, makes you feel doubtful, please consult your physician before buying MusclePharm Wreckage. 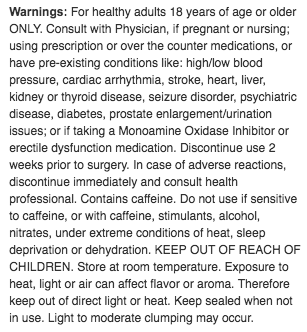 Many pre-workout supplements claim they’re the real deal. We’ve heard that many times over. It gets a bit redundant, honestly.

Well, MusclePharm Wreckage is one pre-workout which packs a lot of substance. It’s one of the most impressive we’ve ever sized up. It’ll jack you up without the dreaded crash effect.

We highly recommend you buy MusclePharm Wreckage. It has a few chinks, but its numerous strengths easily offset these. Make it your go-to pre-workout today.