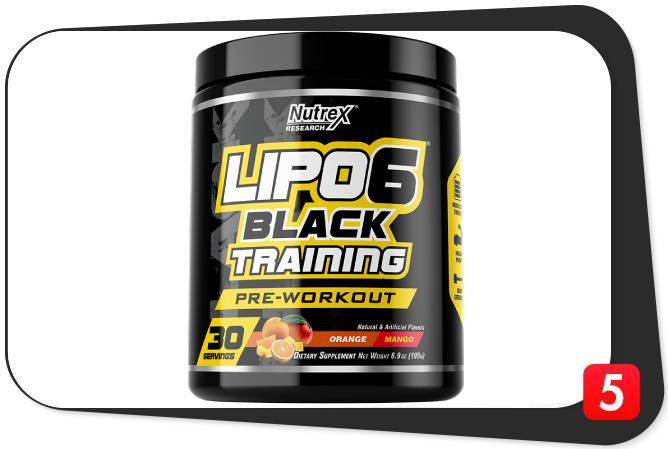 According to Nutrex Research, the company that creates Lipo-6 Black Training, this pre-workout ‘isn’t for the faint-hearted’. This pre-workout is serious. Everything from the design to the ingredient list, if you want to get pumped up for your workout, this supplement may be for you.

Nutrex Research are known for their product line Lipo-6 Black, a popular, sell out fat burner.

As a spinoff of this product, they created Lipo-6 Black Training pre-workout. But does it live up to the same hype as their initial product from the line? Or is it just the same as every other pre-workout? Let’s find out in this review.

Brought to you by the company that brought us Lipo-6 Black, a fat burner so strong that reviewers everywhere were begging consumers to only take one! This initial product caused a lot of commotion, whether good or bad. Some fans claimed it helped them to lose weight, whilst others claimed it caused nausea and other adverse effects.

So what about Lipo-6 Black Training pre-workout? Another product that splits consumers into love and hate camps? In this review we’ll evaluate whether Nutrex Research stick to weight loss supplements and ditch the pre-workout, or whether it’s a hit.

Nutrex Research claims this pre-workout ‘puts your body into overdrive,’ ‘jacks you up quickly,’ and ‘ups your training intensity to a level that will shock you’. The average lifter may read this and think no thanks – even the seasoned or competitive lifter may be a little off put at the thought of their body being pushed into overdrive.

But for some, perhaps after a long day of work or on days you just don’t want to train, these claims may seem appealing. But like many supplements, the ingredients list alone will give you the insight into whether these are just wild, outlandish claims, or whether this pre-workout is packing a punch.

This is a standalone pre-workout with pretty rigid directions for use and an undeniably intimidating ‘warning’ label. It comes in two flavors: wild grape and tropical punch, and each 7.2 oz tub contains 30 servings.

Shake container prior to opening. Mix 1 scoop with 8 to 10 oz of cold water and consume 30 to 45 minutes prior to working out.

Only use 1 scoop in a 24-hour time period, never take more than this.

What Each Ingredient Is For

Choline bitartrate is created when choline and tartaric acid are combined. Tartaric acid increases the absorption rate (bioavailability) of choline, making it more effectively used by the body. Choline is found in foods like animal liver, eggs, beef and fish; but some research suggests that some people aren’t getting enough of it due to absorption difficulties. Deficiencies of choline are associated with poor memory and concentration, hence signaling the need for supplementation.

The role of choline bitartrate as a pre-workout ingredient is to increase muscle contractions and increase focus. It does this by stimulating the neurotransmitter acetylcholine, once absorbed, which then signals to neurons and muscle cells to contract muscles and enhance focus capacity.

However, the research on the efficacy of choline is mixed. One study concluded that only choline supplementation doesn’t improve performance or reduce fatigue, apart from potentially in extreme endurance sports. Another study conducted a double blind placebo trial into the efficacy of choline supplementation for focus, and found that it improved precision and increased reaction time.

The ingredient in a pre-workout is likely going to make you more focused and enhance muscle fiber recruitment, which can improve the mind to muscle connection and intensity of each exercise. But in terms of improving performance or delaying fatigue, research shows that our natural choline levels do not drop enough during exercise to warrant or be benefitted from supplementation.

This ingredient is added to a pre-workout to get the muscle ‘pump’. Glycerol is a naturally occurring sugar alcohol that acts as a junctional metabolite in carbohydrate and lipid metabolism. It’s a staple ingredient in most sports supplements and has been well researched, making it a safe bet.

When glycerol is consumed alongside a lot of water, it pushes you into a state of hyperhydration. Hyperhydration has been shown in research to improve performance and exercise tolerance by around 24 percent. So essentially, consuming this ingredient pre-workout will allow you to work out for longer, by boosting physical endurance, and leave you looking pumped, by increasing water retention.

The specific type of glycerol used in this supplement – GlycerSize – improves the stability of glycerol by adding a silicon dioxide carrier.

The term anhydrous means without water; caffeine anhydrous refers to caffeine that has been processed to remove the water to significantly increase the potency of caffeine. It’s arguably the most popular ingredient in weight loss and pre-workout supplements. It’s well researched but can be dangerous if too much is consumed, which can be easy to do when it’s concentrated in powder form. According to a 2013 study, consuming too much can actually be fatal, though in this case, the amount consumed was a staggering 12g.

In terms of caffeine anhydrous as a pre-workout ingredient, it reduces fatigue, increases alertness and improves athletic performance. All of which are beneficial to getting in a good workout. However, caffeine in high doses can cause a number of side effects, such as an erratic and fast heartbeat, anxiety, insomnia, headaches, nausea and dehydration.

Theobromine is a compound naturally occurring in the cocoa plant. It is used as an ingredient in pre-workouts because it acts as a stimulant. It has a similar effect in the body as caffeine: increasing blood vessel dilation, increasing the heart rate and increasing the need to urinate. Unlike caffeine though, its effects can last for up to 10 hours, which increases the risk of experiencing insomnia or anxiety.

In the above section for caffeine anhydrous, we said that Lipo-6 Black Training was just within the threshold for safe caffeine content.

But this ingredient takes them over the threshold. And could cause jittery side effects, especially if you have a low tolerance to caffeine.

Rauwolfia Vomitoria Extract is an Indian Snake Root, used in African and Indian traditional medicine. Despite the small quantity of this ingredient, it’s arguably one of the most potent and dangerous.

According to research, it can cause serious effects like a slow or irregular heartbeat, dangerous changes in blood pressure, depression, and an increased risk of heart attack and seizures. It’s the ingredient in pre-workout (combined with caffeine) that makes you feel shaky.

There are no researched benefits, whether performance or cognitive, of this supplement. It’s banned in numerous countries such as the United Kingdom.

This ingredient is black pepper extract. It has some researched benefits as a supplement ingredient, such as boosting the bioavailability of the other ingredients and increasing thermogenesis. Boosted thermogenesis basically means your body temperature increases and you’ll be burning more calories at rest; so get ready to sweat during your workout. It also means that you’re likely to absorb more of the ingredients in Lipo-6 Black Training, good and bad.

Huperzine-A is a chemical extracted from the Chinese club moss plant. Its touted benefits include improving memory and cognitive function. The research on this ingredient is minimal, but preliminary research suggests it can be beneficial as a pre-workout supplement to improve focus during the workout. 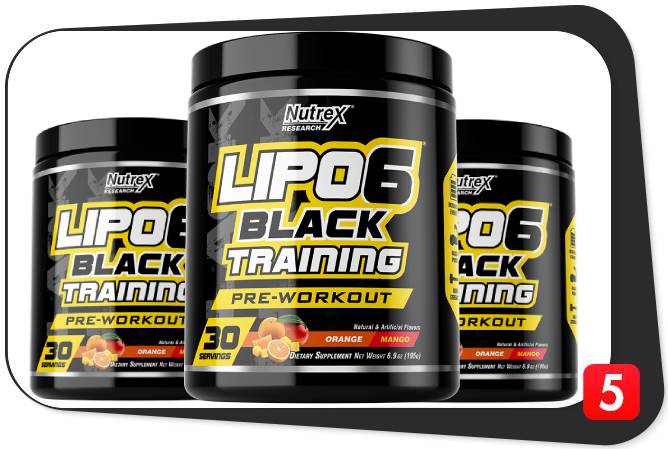 If you want to get anxiety and have trouble sleeping, Lipo-6 Black Training has the formula for you! But in all seriousness, this pre-workout should be approached with caution. It has an extremely high caffeine content, sneakily separated into two ingredients to try and detract the observant consumer from noticing the caffeine content is above the safe or recommended threshold.

That being said, if you don’t like the water retention associated with creatine, this pre-workout might be appealing. Its high caffeine content can definitely switch you on for action and the research behind some of the higher dose ingredients like GlycerSize and choline bitartrate is legitimate. You’ll be feeling noticeably more energized and exhilarated prior to working out and the combination of theobromine means it’s likely to last throughout and after your workout, which is useful if you tend to crash after taking pre-workout.

Nutrex Research is aimed at adults who take lifting seriously. If you struggle with motivation or energy levels, this supplement will take you to the next level. The brand is focused on helping people get shredded and lift at a higher intensity.

Any Potential Side Effects with Lipo 6 Black Training?

Where do we start? The list of potential side effects and interactions with this product seems to be significant. So much so that it’s much easier and quicker if we just highlight the relevant passage from the manufacturer’s own website to make sure we don’t miss anything.

As well as the somewhat intimidating list of medicines that presumably may interact with this product, and the danger of using it when suffering from (a fairly long list) of pre-existing conditions, note the last line – some ingredients in Lipo-6 Black Training may be banned by sports organizations. As we said above. So if you’re competing professionally, do your research… or make a point to avoid this product altogether.

Not to be used by anyone under the age of 18. Do not use if pregnant or nursing, currently taking PDE5 inhibitors or other nitrates for chest pain. Never exceed the recommended maximum dosage. Do not consume synephrine, yohimbe, caffeine, thyroid-boosting compounds from other sources, including but not limited to coffee, tea, soda, energy drinks and other dietary supplements or medications containing phenylephrine, caffeine, or any stimulants whatsoever. This product contains caffeine. Do not use product for longer than 4 weeks and make sure that usage is followed by a 2-week-off-period. Consult your physician prior to use if you are taking any medication, including but not limited to MAO inhibitors, anti-depressants, aspirin, non-steroidal anti-inflammatory drugs or products containing phenylephrine, ephedrine, pseudoephedrine, phenylethylamine or other stimulants. Consult your physician prior to use if you have a medical condition, including but not limited to heart, liver, kidney or thyroid disease, psychiatric disorders, difficulty urinating, diabetes, high blood pressure, pernicious anemia, cardiac arrhythmia, hyper beta-alaninemia, recurrent headaches, enlarged prostate or glaucoma. Discontinue use 2 weeks prior to surgery. Immediately discontinue if you experience rapid heartbeat, dizziness, severe headaches or shortness of breath. This product contains ingredients that may be banned by some sports organizations.

If you want to take your training to the next level, this may be the supplement for you. But approach with caution and start with a smaller than recommended dose to adjust to the extremely high caffeine content. If you want to maximize your pump, take alongside a creatine supplement, because the ingredients are lacking a legitimate pumper. This pre-workout focuses mainly on boosting energy levels.

Take the danger of side effects and medical advice seriously.