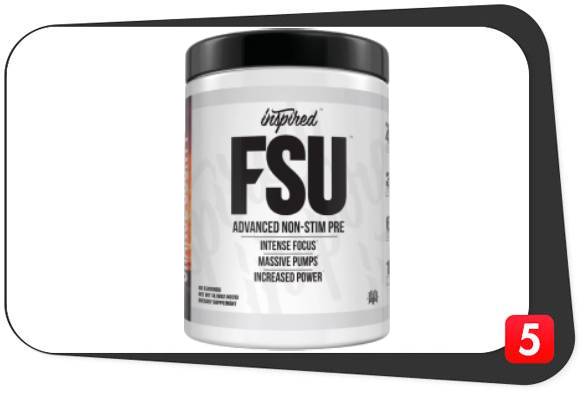 When looking for a good pre-workout, it’s important to consider what type of workout you’re preparing for. Getting ready for a yoga class is a bit different than a strongman competition. Your pre-workout should match your goals.

Regardless, athletes across all types of fitness crave clean, effective supplements for whatever they’re fueling, and that’s what Inspired FSU promises.

Inspired Nutraceuticals claims to offer a “non-stim, pump-free” pre-workout with complete ingredient transparency. Their tagline – “we fuel what inspires you” – yields a pretty heavy social media push in the sports performance world. Their FSU pre-workout comes as a much-desired vegan option with no artificial colors for the health-conscious athlete. Designed to increase energy, blood flow, and focus, let’s assess the ingredients for quality.

The supplement facts per scoop of Inspired FSU Pre-workout are as follows:

If this looks like a long laundry list of ingredients, don’t worry. We’ll dig a bit deeper.

If you actually read the supplement facts through (which most people don’t), you’ll find that the first five ingredients are just derivatives of later additions. Potassium, sodium, calcium, vitamin C, and magnesium are all listed twice on here, just in different forms. That’s not bad, but it’s worth noting that you’re not getting anything extra.

The minerals are all fantastic electrolytes. Sodium and potassium help excitation for neuronal firing. Magnesium and calcium work in tandem to contract and relax muscles. And the one vitamin, vitamin C, acts as an antioxidant to protect your cells.

Citrulline works to stimulate arginine production within the kidneys. By elevating arginine levels, you trigger the production of nitric oxide, a vasodilator. Opening up your blood vessels decreases resistance and elevates delivery of oxygen and other nutrients to the muscle. Therefore, your heart doesn’t have to work as hard, and you get more out of each rep.

Experts recommend around 3500 mg of raw citrulline for enhanced sports performance. Assuming you take two scoops of Inspired FSU, it’s got you covered.

If arginine is the main factor in nitric oxide production, why not go straight to the source? There’s one small issue with that thought: arginine is notoriously hard to absorb through digestion. It basically goes straight through you.

Arginine nitrate attempts to solve that problem. Nitrate itself can be broken down to nitric oxide, and combining arginine with a salt helps absorption. While research suggests it still may not be most bioavailable method, it’s slightly more effective than L-arginine alone.

Creatine monohydrate is the most bioavailable of creatine supplements – 99% of it gets absorbed into the muscle. There, it can stimulate insulin-like growth factor and provide an alternative energy to carbohydrates and fats. By binding to phosphagen, phosphocreatine fuels short, high-intensity exercise.

Betaine anhydrous is a compound found in beets. As a metabolite of choline, it can help build acetylcholine, a neurotransmitter contributing to muscle contraction. A recent study showed that supplementing with betaine increased total reps and volume during a bench press test. Further investigation suggests these effects are due to increased oxygen uptake within muscle.

However, these results came from two weeks of 2.5g betaine supplementation daily. To replicate these results, you’d need to take two scoops of Inspired FSU each day for 14 days. Which is possible, but maybe not the immediate effects you’re looking for from a pre-workout.

Potassium glycerophosphate is just a highly water-soluble source of the mineral potassium. We’ve already covered the importance of this electrolyte above, but here’s a reminder: it helps muscle contraction, nerve transmissions, and fluid balance.

This is just a conglomeration of the aforementioned electrolyte blends pulled from seaweed. Using Aquamin is a respectably vegan way to add in natural, vital micronutrients.

As it looks like this pre-workout is designed for elite fitness athletes (CrossFitters, rugby players, etc), you can imagine there’s a lot of sweat going on. Is Inspired FSU’s Himalayan pink salt better than your standard sports drink? Probably not. But it helps combine all of your needs into one, rather than carry 19 supplements to the gym.

Tyrosine is a critical element to synthesize epinephrine, norepinephrine, and dopamine. Without these catecholamines, our bodies couldn’t respond effectively to stress.  And guess what a tough workout is? Buckets of stress.

By supplementing tyrosine before a workout, we have more resources to tap into before exhausting our neurotransmitters. Tyrosine itself has been associated with elevated attention levels and clearer thinking.

Lion’s mane is a mushroom full of a compound called amycenone. This molecule helps regulate neuronal growth and preservation through synthesizing nerve growth factor. Therefore, it’s known to improve cognition and increase neuroplasticity. As a pre-workout agent, that means it primarily acts on your brain. It might not make your physical performance better, but it could affect your focus. And who doesn’t get a better workout when they’re dialed in?

NeuroFactor is a trademarked name for whole coffee fruit extract. Here’s what their website says about the product:

“NeuroFactor™ contains a unique profile of polyphenols that have been shown in a clinical study to stimulate the production of Brain-Derived Neurotrophic Factor (BDNF), a key neuroprotein involved in overall brain health. BDNF has been widely reported to play a critical role in neuronal development, maintenance, repair, and protection against neuro-degeneration.”

Independent research does suggest that certain extraction methods can raise the antioxidant profile. However, I don’t see anything about their specific extraction methods, and I’m willing to bet they keep trade secrets close.

As coffee does contain caffeine, it technically goes against their anti-stimulant message. But such a small amount has negligible results. If anything, this ingredient won’t hurt, and could potentially help your brain. 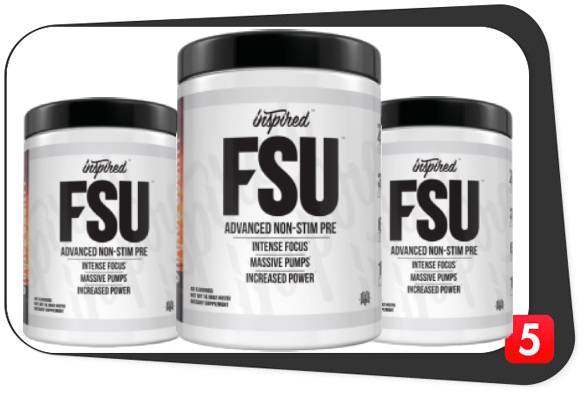 Check out Best5Supps’
– #1 Pre-Workout This Year –

Inspired FSU holds true to their nutraceutical brand. It’s completely void of stimulants, contains all-natural ingredients, and focuses on energy promotion from the inside out. Their inclusion of electrolytes and salts likens it to a sports drink, which makes it more appropriate for sweat-inducing workouts. A large portion of ingredients target brain health and focus, which allows athletes to hack in to their natural ability. Creatine and citrulline are both performance enhancers heavily backed by evidence.

Inspired FSU seems pretty in tune with fluid balance, which is something more “traditional’ pre-workouts lack. Since it’s not loaded with stimulants, and instead focuses on hydration balance and blood flow, it’s ideal for longer workouts of sustained intensity. It’s also vegan, which is a huge benefit for that population (and the environment).

It’s marketed as sports nutrition, so think competitive athletes instead of casual lifters or gym bros. According to their Instagram, it looks like healthy mix of CrossFitters, powerlifters, rugby players, and figure competitors.

Creatine monohydrate causes bloating in some during the first few weeks of supplementation. Barring allergies, Inspired FSU has no real further side effects.

Check out Best5Supps’
– #1 Pre-Workout This Year –

Inspired’s FSU sells 20-serving containers for $44.95. Apparently if you pre-order, however, you’ll save 30%. It looks like Inspired FSU ships out mid-September.

Of all the pre-workout supplements we’ve seen online, this one ranks pretty high. It features naturally-derived, evidence-based ingredients in safe quantities.

The only concerning thing is that it’s just a bunch of theoretical claims, as Inspired FSU hasn’t hit the market (as of this writing). We all know the benefits of peer-reviewed supplements, so only time will tell how the athletic community responds.