You are here: Home / Pre-Workout / Beyond Raw Lit vs. C4 Ripped 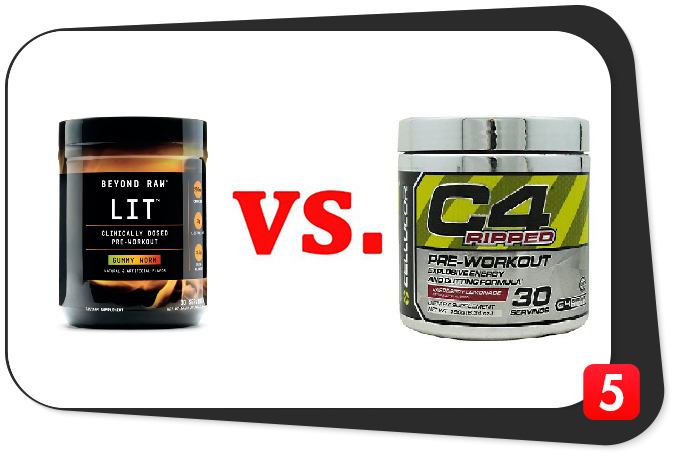 Beyond Raw Lit vs. C4 Ripped is the clash of the industry supplier trying to make a name for its own supplements and the industry staple that has been a fan favorite for over a decade. While both of these pre-workout supplements promise hours of energy and elite-level focus, they go about it in different ways. Beyond Raw Lit claims science backs it up while C4 Ripped boasts a powerful thermogenic blend to ignite fat burning and spike energy levels.

Let’s take a look at the formulas of both supplements to see which pre-workout is able to hold its own in this Beyond Raw Lit vs. C4 Ripped review.

Beyond Raw Lit addresses the concerns of the supplement skeptic right away, assuring buyers that the formula is “clinically-dosed.” In other words, GNC did its research, extracting the same dosage levels from scientific studies and using them as a guideline. For most of their ingredients like beta-alanine, this claim checks out. Beyond Raw Lit addresses the pre-workout problem in three ways:

C4 Ripped puts its faith in its thermogenic formula as a double whammy of energy and metabolic amplification. On paper, the selected ingredients are well-selected, boasting scientific-backing. The problem comes in with the dosage levels, but more on that below. First, the finer points of C4 Ripped:

How are Beyond Raw Lit and C4 Ripped formulas similar?

Beyond Raw Lit and C4 Ripped both want to support your performance intra-workout but have very different ways of achieving that goal. The two supplements only share two ingredients, which are consequently the foundation of their success.

What’s a pre-workout without caffeine? It’s a scientifically proven way to skyrocket your physical and mental energy levels. What’s more, it’s also a great fat burner. While there is a difference of 100 mg between Beyond Raw Lit and C4 Ripped, one can argue that this isn’t necessarily a bad thing.

Modern day pre-workouts overload the caffeine content where it becomes too much for the average user. A lack of caffeine also sets up the stage to use a variety of stimulants such as yohimbine and theacrine to ensure an elite quality pre-workout. Unfortunately, C4 Ripped doesn’t take advantage of this, producing a mild-mannered energy boost no better than a cup of coffee.

How are the Beyond Raw Lit and C4 RIPPED formulas different?

Beyond Raw Lit and C4 Ripped both contain the strength booster and performance enhancer beta-alanine but the difference is in the dosage.

The clinically-dosed 3.2 grams per serving overshadows the measly 1.6 grams in C4 Ripped. This dosage difference would require a double dose of C4 Ripped, elevating both caffeine and beta-alanine content. It also effectively cuts your supplement shelf life in half. Not good for the wallet.

There are three key ingredients in Beyond Raw Lit that you won’t find in C4 Ripped:

elevATP®: Any supplement can throw in some creatine, but Beyond Raw Lit has gone above and beyond the call of  duty to supply muscle-friendly adenosine triphosphate (ATP) with ancient peat apple extract, which can boost performance and power output.

NeuroFactor™ Coffee Fruit Extract: Stimulants like caffeine (they can also produce side effects if one takes them in excess) are okay, but nootropics provide a different level of focus and concentration. Beyond Raw Lit contains coffee fruit extract, which fitness experts believe supports alertness, focus, and cognitive performance.

N-Acetyl-L-Tyrosine: An excellent nootropic ingredient, n-acetyl-l-tyrosine can amplify focus and concentration while helping with cognitive decline, making it perfect for a pre-workout supplement. Unfortunately, C4 Ripped doesn’t state the dosage as it’s in a proprietary blend.

Arginine-AKG: Studies suggest that l-arginine, a precursor to creatine, is an excellent performance booster. It also helps with recovery and cardiovascular health.

Beyond Raw Lit is the superior pre-workout formula in two ways: first, the formula uses proven clinically-dosed ingredients. Second, Beyond Raw Lit doesn’t keep you guessing with proprietary blends – something C4 Ripped resorts to. This hurts the latter’s image.

For a one-month supply, C4 Ripped is far more expensive than Beyond Raw Lit for some reason. The good news: you will most likely find C4 Ripped at a lower price tag since it’s available on Amazon and in your local supplement stores, including GNC. Speaking of GNC, you can only purchase Beyond Raw Lit from the company as its the manufacturer.

Remember that GNC often has buy-one-get-one half-off deals. Amazon and Bodybuilding.com offer weekly sales so shop around and keep your eyes open for the lower price point, which is bound to come about.

Beyond Raw Lit vs. C4 Ripped: Which is Better?

There isn’t much of a competition here. C4 Ripped enters the fight based more on the merit of its predecessors rather than a proven formula. It’s underdosed where it counts, and doesn’t even reveal the information you need to make a sound judgment on the effectiveness of the supplement.

Beyond Raw Lit contains a clinically-dosed formula of proven energy boosters and nootropics. It ensures that you have the energy you need on a mental and physical level to the point that it supplies your muscle tissue with two sources of ATP.

Cellucor products are great, but they need to head back to the drawing board with C4 Ripped. It’s obvious who takes the victory here… 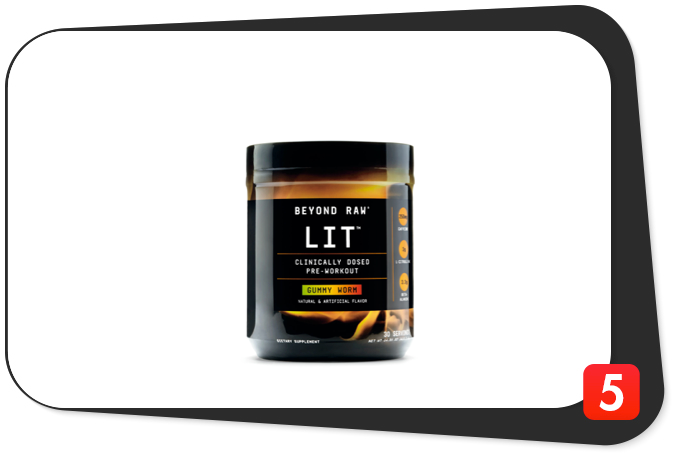 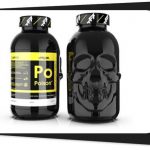