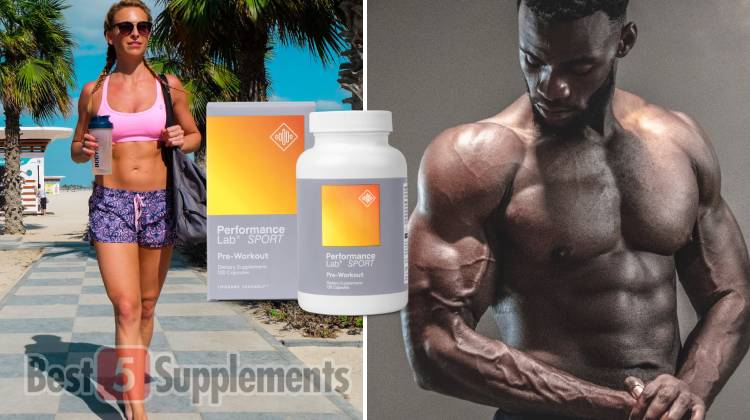 Ever wondered how giraffes get so big without eating meat?

If you’re a vegan, odds are the answer is, “Yes,” and that you’ve often made this point to justify your vegan lifestyle to devout meat eaters.

Because it’s a great point to make: many herbivore mammals are gigantic, and they’re gigantic thanks to the rich source of anabolic proteins and nutrients found in plants. Not meats.

Even omnivores on the more carnivorous side of life are learning that adding more greens to their daily diet comes with immense health benefits, including those visibly manifested in the gym. Which is why many exercisers, vegan and non-vegan alike, are turning to more plant-based supplements.

After all, there’s a reason why Popeye gets juiced on spinach and not bacon.

But what then is the best plant-based supplement to take for working out. What’s the Best Vegan Pre-Workout to Buy in 2020?

Let’s read to find out!

How do we go about determining the best vegan pre-workout (PWO) supplement? It’s simple, really.

Although, ideally, by detailing all the features of an awesome vegan PWO, you’ll not only know which vegan PWO is the best vegan PWO, but you’ll also be better equipped to find other awesome supplement stacks to meet your fitness goals.

So, first, let’s start this guide with:

Which Ingredients Should You Look for in a Vegan Pre-Workout?

Of course, any animal byproducts are off the list. However, this doesn’t mean vegans have to compromise taking an effective pre-workout for a vegan-friendly one. If anything, considering the vegan community’s somewhat dogmatic focus on healthy manufacturing processes, vegan supplement manufacturers are held to a higher standard than their non-vegan counterparts. So much so that it’s likely that the vegan workout supplement will be favored even by the average omnivore.

Even so, are there ingredients that vegans should specifically look for in a PWO supplement? While there are plenty of vegan-friendly pre-workout ingredients to sift through, a few of the best include:

Naturally concentrated in muscle tissue, creatine is an organic compound used for the production of ATP energy during strenuous activities, such as weight training. There’s no wonder why creatine is one of the most popular go-to ergogenics for athletes and exercisers.

Compared to other bodybuilding substances, creatine is surprisingly safe to use on a daily, long-term basis; although, many supplements require on/off cycling due to their use of inferior, over-dosed creatine.

Although creatine is produced in the liver, vegans have lower amounts of muscle creatine, as it’s virtually excluded from the vegan diet.

This makes creatine especially beneficial to the vegan exerciser.

Highly concentrated in fast-twitch muscle tissue, L-carnosine is also an amino virtually absent from the vegan diet. Similar to creatine, carnosine isn’t an essential amino, as your body synthesizes it from the aminos beta-alanine and histidine.

Nonetheless, vegans tend to have less carnosine in their muscles than the more carnivorous eaters, making it a smart supplement choice for vegan exercisers.

As a supplement, L-carnosine constructed out of plant-based beta-alanine and histidine may benefit exercise performance by promoting antioxidant capacity within muscle tissue, reducing the negative impact of exercise-induced oxidative stress, while also buffering muscle-damaging acids and advanced glycation end-products (AGEs).

An increasingly popular pre-workout ingredient, L-citrulline is an amino precursor to L-arginine, an amino best known for its N.O. boosting potential. Emphasis on potential, which, unfortunately, supplementary L-arginine isn’t able to fully realize due to the dietary amino’s inability to fully survive the digestive tract.

Essentially, when taken in dietary form, L-arginine is easily denatured before being absorbed into the body. This is why L-citrulline, which may better survive digestion, is the preferred L-arginine option.

Once absorbed, L-citrulline converts to L-arginine, supplying the amino’s N.O. boosting benefits for an increase on muscular circulation. The result: a greater supply of oxygen and fuel to muscle tissue for improved exercise endurance and strength.

Improved cognition and circulation—the mind-body benefits of this herbal extract extend well beyond your time in the gym, making it a great choice for total body health enhancement.

Even so, are there micronutrients that are missing or lacking in a totally plant-based diet? A few that vegans should look for are vitamin B12, vitamin D, and heme iron, which is a type of iron only found in (typically red) meats. 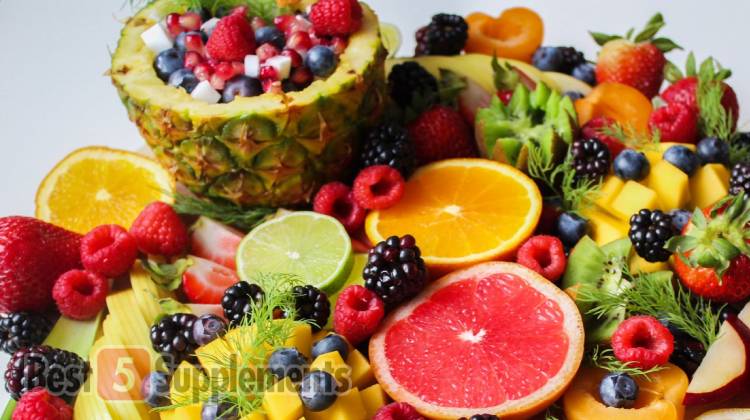 The Health Advantages of a Vegan Pre-Workout

Naturally, vegans tend to be concerned not only with what’s in a supplement formula but what’s outside of the formula as well, meaning the supplement’s form of delivery (capsules? tablets? etc.), the additives used, the manufacturing processed used to create the ingredients, etc. With so many supplement and food brands cashing in on the whole-food vegan trend that’s sweeping the globe, it can be difficult to discern a truly healthy vegan option from some plant-based crap that’s technically vegan but still absolute garbage for you and the environment.

For example, Burger King’s vegan-friendly Impossible Burger that was recently (and rightfully) mocked by South Park.

If a supplement manufacturer checks out as the real deal when it comes to supplying truly healthy, eco-friendly, vegan-friendly products, be sure to spread the good word on their supplements. Because the health advantages range from improved personal, physical performance to safe, environmentally sound manufacturing practices, from the wellbeing of the individual to the global community.

Strange times we live in when we have to consider the global impact of what we consume. But that’s just how it is now—either you care or you don’t. Either way, an effective vegan pre-workout supplement, one that improves both your muscle gains and long-term health, seems like an easy choice to make.

There are other factors to consider, such as:

The Best 5 measure of the “Best” is incredibly comprehensive, reviewing not only the supplement’s formula but also how the formula’s delivered, who’s delivering the formula, what’s the formula’s environmental impact, and so on. And the best vegan pre-workout that we’ve found to meet all these criteria is: 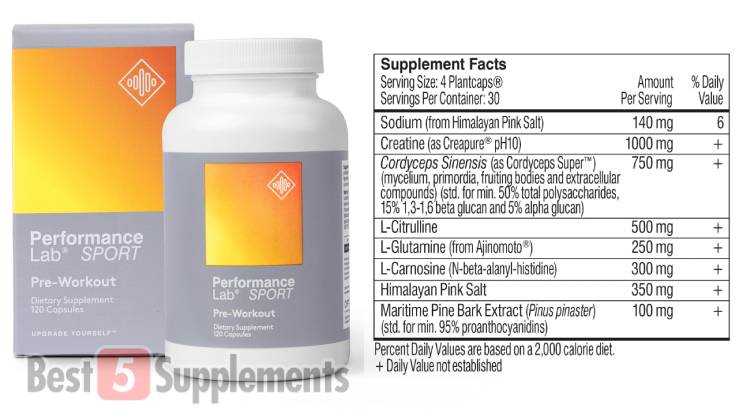 Easily, the best vegan pre-workout to buy in 2020 is Performance Lab SPORT Pre-Workout, a creatine-powered, citrulline-driven muscle-primer designed with the intense gymgoer in mind.

None of that synthetic garbo that leaves you unnecessarily crashed and cramped out later in the day. Only that good, green stuff, baby.

Here’s how this stack works:

Packed into 4-capsule servings, the Performance Lab SPORT Pre-Workout formula supplies a simple, yet complex PWO ingredient combination that energizes, nourishes, and replenishes muscle performance without use of any animal byproducts or synthetic stimulants. Only all-natural performance enhancers. Here they be:

Creatine (as Creapure®): while most supplements use a cheap, inferior creatine form, Performance Lab’s Creapure® is an easy-to-absorb 99.5% pure creatine monohydrate with a low risk of bloating and upset stomach—two common side effects of weak creatine. Plus, the enhanced bio-availability allows for a modest dosage, eliminating any need to cycle this creatine.

Cordyceps Sinensis (as Cordyceps Super™): as somewhat of a newcomer to the supplement scene, cordyceps is a fungal ingredient that many ingredients get wrong. Performance Lab gets cordyceps right with its standardized Cordyceps Super™ extract that supplies a potent, nature-identical concentration of this fungus’ bio-active constituents.

For a supplement to truly qualify as vegan, it isn’t enough to have all-natural, plant-based ingredients. The “Other Ingredients” must also meet the standard, and, hell yea, Performance Lab SPORT Pre-Workout delivers on that front as well with its Plantcaps® capsules.

Sounds kind of absurd to be amped over a supplement’s choice of capsules, but Performance Lab’s use of Plantcaps® is truly impressive. Made out of fermented tapioca (pullulan), these capsules are not only free of animal byproducts but they also provide marginal prebiotic benefits for your gut microbiota. No other additives or colorants or bogus “vegetable-derived” lubricants.

Not all vegetable-derived additives that technically qualify as vegan are good for you. So, props to Performance Lab for going vegan the honest way.

As mentioned earlier, adding a multivitamin supplement to your workout stack is a great idea. By establishing a firm micronutrient foundation, an effective multivitamin supplement may not only fill the nutritional gaps of the modern diet, vegan or otherwise, but give other health supplements a sturdy enough nutrient baseline upon which to optimize more specific aspects of health and performance. And Performance Lab Whole-Food Multivitamin is one of the best multivitamin options for vegans and non-vegans alike.

Abiding by the same vegan-friendly, eco-friendly, non-GMO standards as Performance Lab SPORT Pre-Workout, Performance Lab Whole-Food Multivitamin offers a comprehensive complex of vitamins and minerals sourced from a patented fermentation process called BioGenesis™. The probiotic design of this multivitamin pairs well with Performance Lab’s prebiotic Plantcaps® in such a way that even those with sensitive stomachs, who tend to avoid multivitamins due to digestive concerns, may actually notice an improvement in their overall gut health.

Performance Lab Whole-Food Multivitamin provides two formulas, a “For Men” version and a “For Women” version.

*To learn more about these multivitamin stacks, head to the Performance Lab website: link here.

We know what you’re thinking: using insects as an ingredient source breaks the vegan covenant. Fortunately, Performance Lab doesn’t use insects as an ingredient source. Rather they produce their cordyceps through a patented process (Cordyceps Super™) that mimics the natural conditions required to grow this fungus, therefore avoiding any safety risks or any other environmental and ethical concerns associated with procuring larvae-based cordyceps.

Is it okay to take a pre-workout supplement while fasting?

Where can I buy Performance Lab SPORT Pre-Workout?

Performance Lab exclusively sells their products, so no Amazon or GNC listings. However, this allows Performance Lab better control over their pricing.

So, if you’re planning on taking this supplement daily for a long time, buying in bulk is the most cost-effective way to go.

With so many pre-workout supplements out there that rely on risky stimulants and subtly insert harmful additives, it’s easy to forget that health supplements are supposed to be improving our …well, health. Taking pre-workout stacks that deteriorate certain aspects of our health contribute to the attitude that big muscles and a ripped bod come at the cost of long-term health.

Really, the opposite is true. Healthy is sexy.

And while, yes, there are no significant gains without significant pains, an effective pre-workout supplement, like Performance Lab SPORT Pre-Workout, may help us get those gains without too much pain. And it’ll work with only all-natural, clean, green ingredients, too, which, frankly, are the only PWO ingredients that seem to actually qualify as “health” supplements these days.