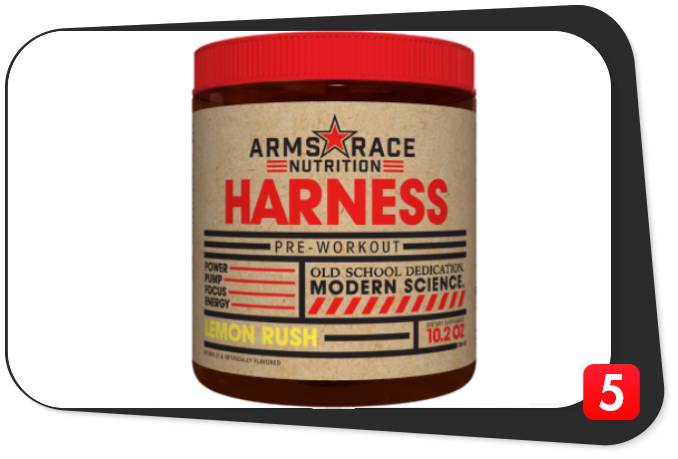 Harness the Benefits of this Pre-Workout and Win the Arms Race for… well, Arms!

Arms Race Nutrition is part of the Doug Miller brand stable and he must have felt pretty smug that no one else came up with the name ‘Arms Race’ before he did. That’s exactly what we’d call our supplement company if Doug hadn’t beaten us to the punch!

But names are meaningless if you don’t make good on your promises, so does Harness from Arms Race Nutrition help speed up your journey to peak perfection or do we have a failure to launch on our hands?

Harness claims to provide Power, Pump, Focus and Energy and comes from a company that is committed to providing precision doses of effective and safe ingredients for maximum results with minimal risk. Formula notes:

Let’s take a closer look at the formula. 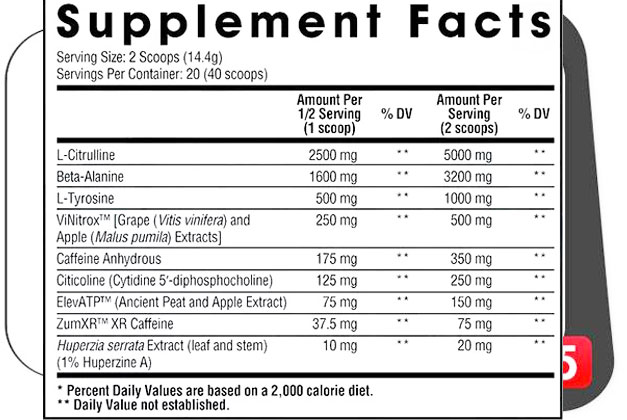 Starting us off is L-citrulline, a non-essential amino acid that is primarily used in a pre-workout situation to boost nitric oxide (NO) production but also supports protein synthesis as an additional post-workout benefit.

The science certainly checks out here as L-citrulline ingestion prompts your body to produce more L-arginine, which in turn promotes NO synthesis. NO causes blood vessels to dilate which reduces blood pressure and allows for higher blood flow to your muscles. A strong supply of oxygenated blood will help your muscles work for longer without tiring, making L-citrulline an ideal pre-workout ingredient.

The fact that is also supports protein synthesis means that it can prolong an anabolic state and support muscle growth and recovery long after you’ve left the gym too.

Some pre-workout ingredients are still the subject of debate as to whether they work or not. Others have little to no evidence to support their use, yet they keep popping up in formulas like a smell that won’t go away. And then there is beta-alanine. Arguably under-used and most certainly effective based on available evidence.

Beta-alanine is known to increase the concentration of carnosine in your muscles which allows for higher levels of performance and a delay to the onset of muscular fatigue. 3.2g is roughly equivalent to the highly scientific measurement of “a buttload” but the list of possible side effects is so short you could probably write it on the side of one capsule of Harness, so no need to worry (mostly harmless tingles).

This is a great addition to the formula as it not only allows you to work out for longer, but also to maintain maximum exertion right up until the end of your session.

Harness is not the first pre-workout to incorporate l-tyrosine and it won’t be the last, but opinions are divided on whether it has any benefits. Scientifically speaking, l-tyrosine’s job is to help to produce dopamine, adrenaline and noradrenaline – substances associated with positive mood and responding to stress.

We’re sold on l-tyrosine’s ability to improve mental performance, as it’s been shown to maintain cognitive performance under stress and increase cognitive flexibility (multitasking essentially – yes, guys can do it too) so it kind of supports the ‘focus’ benefit of Harness.

Courtesy of Nexira, a natural ingredient specialist manufacturer, ViNitrox™ is a blend of polyphenols from apples and grapes. They claim it can prolong training time by 10% and delay fatigue by 13% and have helpfully linked us to a study that supports these claims from their website.

Outside of this study the evidence to support polyphenols as an effective pre-workout ingredient is mixed, but recent studies have been looking positive. 300mg of polyphenols could improve exercise performance by enhancing blood flow to the muscles (not in the same NO boosting way as l-citrulline though) and higher doses could help speed up recovery from exercise.

There are two things everyone probably already knows about caffeine;

*not a verified statistic.

We won’t bore you with the scientific details, because caffeine has many potential interactions, but it can certainly prolong high performance during exercise and increase performance in endurance activities. If it’s good enough to keep Special Forces soldiers sharp throughout night operations, it can damn well get you through leg day.

The second point is more controversial, and depends on the individual involved, but the advice from the medical profession is that 400mg of caffeine daily is safe for most adults. Beyond this, it varies by person and caffeine is something to which you can build up an immunity over time.

Best advice here would be to avoid taking other sources of caffeine alongside Harness and don’t take it close to bedtime if you want to, you know, sleep at any point.

Otherwise known as CPD Choline, or simply choline, this little nutrient has many known benefits with more still being discovered. The main benefit of choline for athletes is to reduce body mass quickly and its main application is in combat sports as a way to make weight without compromising strength.

Outside of that there is no evidential link between choline supplementation and exercise performance, though long periods of exertion are known to reduce choline levels, so maintaining them in this way makes sense.

Choline has been strongly linked to improved cognitive performance and better focus, which is what justifies its place in the formula.

We turn to FutureCeuticals next for another polyphenol-based blend and their product ElevATP™. It’s an award-winning compound that promises to support lean muscle, improve power output and prevent performance dips from overtraining. The primary mechanism for this seems to be an increase in levels of ATP in your cells, helping to produce more energy.

There is certainly evidence that polyphenols like the ones in ElevATP™ can help regulate cellular energy production for increased athletic performance, but it seems odd to not include this alongside a source of creatine. Without knowing exactly what’s in ElevATP™ we can’t comment any further on its effectiveness, but it’s won awards and they don’t give those things out to just anyone!

Operating out of the US despite a very European sounding name, ZümXR® produce three delayed release caffeine products – all designed to mitigate the inevitable crash that comes with consuming regular caffeine, but with different release profiles.

Their Delayed Release profile provides the hit after an hour; their Extended Release profile releases the caffeine gradually over 4-5 hours, while the Extended Release Liquid Stable version offers a sustained release over six hours. We don’t know which product is in Harness, but we’re confident it’s there to lessen the blow once the caffeine anhydrous dries up (pun definitely intended).

Huperzia Serrata is also called Chinese club moss and contains the active ingredient huperzine A. This ingredient raises acetylcholine levels and acetylcholine helps transmit signals from your brain to your muscles.

Choline is primarily responsible for producing acetylcholine so while we’re maintaining choline levels elsewhere in the formula, the boost to acetylcholine is welcome too so you can continue to perform at a high level during the latter stages of your workout. 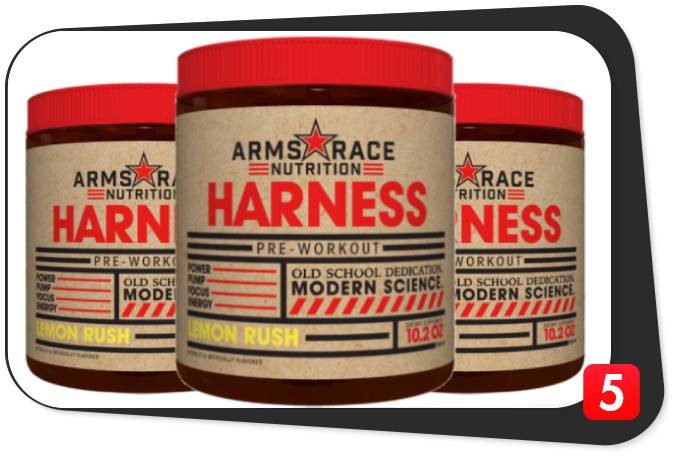 The phrase ‘greater than the sum of its parts’ comes to mind. If you’re not familiar with that one, it basically means that a bunch of things viewed in isolation might not look like much, but once you throw them all together, they become something more special.

Think along the lines of the ingredients of your favorite meal, the individual cogs and springs in a watch or the Megazord from Power Rangers.

This concept is also commonly called ‘formula synergy’ – the idea that the ingredients complement each other to the point that if you removed one, the whole thing suffers inexorably.

The caffeine is the primary ass-kicker of the show here, but the supporting cast lift it above a simple boot between the buttcheeks. The XR caffeine takes the edge off and l-citrulline, beta-alanine and the other two blends ensure your body does not over-fatigue as you work out. Choline and huperzine A help to replenish stores for the final stages of your session and enhance focus.

L-tyrosine is a bit of an outlier as it improves mental performance but not necessarily focus. It would help to refocus if you get distracted though.

Some might think that the lack of creatine is a problem, but we think it’s fine. Quality creatine is cheap to buy and there are different opinions on how best to cycle it, so why force a fixed dose into a pre-workout when it’s equally easy and more flexible to take it separately?

Arms Race deliver on all their promises to a greater or lesser extent. The formula will certainly improve;

If you are ok with caffeine, but still want to steer clear of pre-workouts that could have you grinding your teeth down to stubs, then Harness could be just what you are looking for.

It provides a massive boost to your workout efficiency and will have you lifting heavier and for longer periods of time, but you won’t come crashing back to earth afterwards.

Instead, the supporting ingredients will keep your muscles fed and oxygenated throughout, ensuring that your body keeps up with whatever you’re putting it through.

So, if you’re looking for a safe, evidence-backed and highly effective pre-workout – join the Arms Race!

Caffeine has a known list of side effects that include headaches, nausea, nervousness, insomnia and anxiety but the dose in Harness is within what’s safe for most adults. As long as you limit your caffeine intake from other sources, you should be golden.

Higher doses of beta-alanine, such as the one included here, is likely to cause the ‘tingles’, a feeling similar to pins and needles, as it works on the central nervous system. It may be disconcerting, but it is harmless and safe to take.

You can pick up 20 servings and a penny change for $45 on the official Arms Race Nutrition website. It’s also available from Amazon or other supplement stores.

Arms Race could have delivered a straight down the line stimulant-led formula and knocked it out of the park, but they didn’t. They chose to deliver something that leans heavily on an energy boost from stimulants but that also delivers benefits to every other area of your workout game.

They have mitigated the risk wherever possible and tried their best to ensure that you leave the gym feeling even better than you did when you walked in, and they’ve succeeded.

Sure, you can find stronger pre-workout formulas, but it’s a respectable option should you choose Arms Race Nutrition Harness. We personally won’t be changing from our #1 pre-workout this year, though,