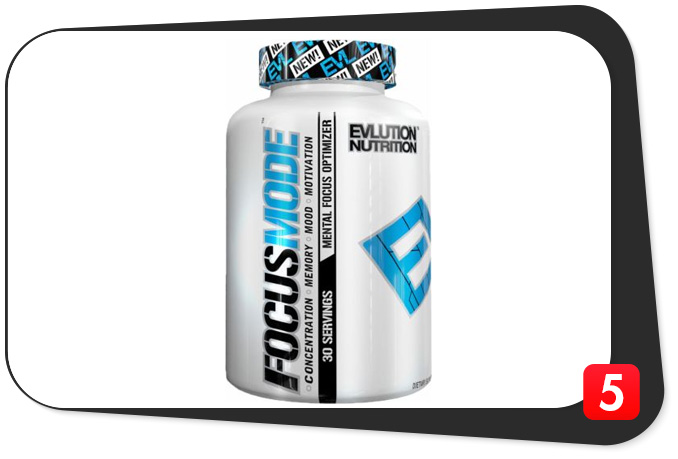 When the mind & body are stressed, focus & attention tank.

Ironically, it’s during stress-inducing states that the mind needs to be focused & attentive the most–e.g. during game-day, exam-day, leg-day, etc., etc. This is where EVL FocusMode comes in.

Given EVLUTION’s long list of pre-workouts, post-workouts, & recovery products, the company seems to know the ins-&-outs of beast mode. So it makes sense that the manufacturers would eventually tread into the beast mode territory of the brain. Because if you’re able to take out the mental stresses of daily First World living, what’s left but sheer primal brain power?

Consider this review as an answer to that question.

EVLUTION Nutrition is a top manufacturer of bro supplements, but how well can they do more geek-oriented nootropics? FocusMode seeks to answer that with its geeky bro-toned focus booster that seems to work in both the gym & library (& Skyrim). Formula notes:

FocusMode packs in a fat L-Tyrosine dosage for your tyred minds.

Traditionally, a well-crafted formula is one that spreads its capsule space across a range of bio-diverse, synergistic ingredient choices. But FocusMode says eff that:

“We’re doubling down on N-Acetyl L-Tyrosine!”

Not a bad move, considering how awesome this nootropic is for the oft-stressed busy minds of our busy world. Granted, FocusMode also provides other valuable nootropics to round out this formula, and we’ll get into how awesome those are as well, but first let’s take a look at FocusMode’s premier ingredient:

Not only is this amino acid heavily dosed (600 mg), but its in top “bio-active” N-Acetyl L-Tyrosine (NALT) form. Potency, quality, & quantity–FocusMode does them all correctly here for this well-researched anti-stress compound.

Yet, here’s the thing about NALT: It only works during stressful conditions.

When the mind is stressed or fatigued, it burns Tyrosine. After awhile, this burn leads to decreased focus & cognition. Supplementing L-Tyrosine helps resist this decrease, in effect feeling like a boost of mental power in otherwise mind-numbing states. 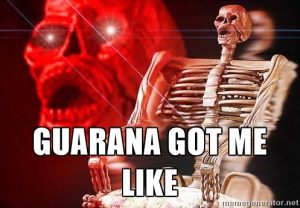 The second heaviest dosed ingredient in this formula provides a different, more common, yet non-nootropic form of mental stimulation: Caffeine.

Ever heard of this stuff?

Guarana actually has a denser caffeine concentration than coffee, making this 340 mg dosage nothing to scoff at. Manufacturers may hide guarana’s caffeine content by labeling at “guaranine,” but this don’t be fooled: Guaranine is essentially another name for caffeine.

Of all the choline sources, Alpha-GPC is believed to have the densest choline concentration that’s also nootropic (for its ability to cross the blood-brain barrier). This makes Alpha-GPC a valuable brain enhancer, providing raw choline material for neurotransmitter acetylcholine and cell membrane fatty acids (phosphatidylcholine).

This is what we’d call a “non-nootropic source of choline.”

Considering the nice 200 mg dosage of nootropic Alpha-GPC, we’re scratching our heads at this 200 mg of Choline Bitartrate, which essentially offers as much nootropic power as eating scrambled eggs. With that in mind, it may be healthy, but it’s not as powerful for the brain–thus we’d rather see this 200 mg spent on more Alpha-GPC instead.

Acting primarily as a stimulant, Theacrine is structurally & functionally similar to caffeine, a non-nootropic spike in mental energy. Yet, also similar to caffeine, at lower dosages Theacrine may provide sedative effects (did you know that about caffeine?). However, whereas caffeine requires uncommonly low doses to accomplish sedation, Theacrine can do so at more mid-range doses.

It’s hard to say whether the mental relaxation powers of Theacrine will complement caffeine’s energy excess in this formula, or further spike up the energy (due to its similar nature to caffeine), but it’s a cool. unique addition all the same.

There’s less of a question whether Sceletium tortuosum will stimulate & sedate the mind, compared to FocusMode’s Theacrine & caffeine contents.

Zembrin is a quality brand that’s surprisingly underutilized by nootropic products, considering its well-researched anti-anxiety, mood-boosting benefits. This seems to not only complement FocusMode’s stimulation, but to further promote Tyrosine’s anti-stress efforts.

There’s almost no excuse to not use Huperzine A in your nootropic formula.

That, my friends, is called synergy.

For a formula that possesses zero of our Top 5 Favorite Nootropics, EVL FocusMode is an impressively high-value nootropic stack. In fact, it’s the only nootropic product on our 2017 ed. Best 5 Nootropic Supplements list that doesn’t have any of our nootropic favorites.

Yet, it does what it does so well that we can’t deny it. Key “do-well” features:

The sum total of FocusMode’s features is a potent, powerful focus booster that both decreases stress & stimulates mental energy for game-time (or library-time) brain power.

If there’s one beef we have with this formula: No L-Theanine.

Granted, Zembrin may help take the edge off of FocusMode’s caffeinated energy, but L-Theanine has more research to back up this bio-effect. We’re down for L-Theanine in any nootropic stack, but FocusMode would doubly benefit by this green tea compound (something to consider EVLUTION!).

Other than that, FocusMode is a super sweet focus booster for now-&-later cognition.

Of course, as we’ve already mentioned, if you’re already in a non-stressed state, FocusMode won’t do much for you focus, because, well… your focus is doing just fine. As such, much of FocusMode’s value comes in the “as-needed” category–which, let’s face it, is quite often.

Geeks, bros, brogeeks, geekbros, & doodettes. According to its website, FocusMode is intended to sharpen mental performance related to “Work. Study. Train. Game.” These sound like the habits of college students & twenty-something year olds. Yet, we’d say FocusMode may help anyone with a busy lifestyle, who may benefit by less stress & more energy… i.e. everyone?

None reported. FocusMode shies away from drugs & synthetics, opting for all-natural (or at least natural-sourced) ingredients. Reserving FocusMode for “game-day” mental performance may also prevent any tolerance build-up to the formula’s L-Tyrosine or stimulation.

Speaking of stimulation, caffeine sensitive users should supplement FocusMode with caution, lest you want to absolutely destroy your focus with brain-shaking jitters.

At the least, FocusMode is healthy alternative to coffee. At the most, it’s a powerful nootropic. Likely it’s both: A powerful nootropic alternative to coffee. Yet, you don’t even need to be a coffee drinker, or caffeine consumer, to appreciate FocusMode’s focus boosting formula. EVLUTION typically supplies bro-style supplements, so their foray into nootropics initially drew questions from us–which we’re happy to answer with a fat YES, FocusMode works.