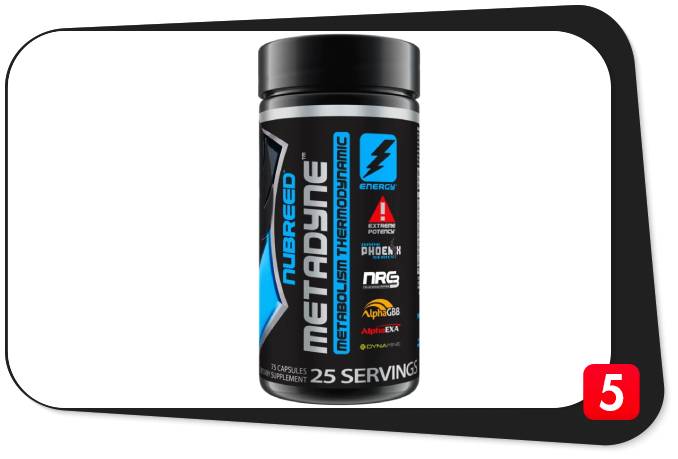 Weight loss is a multi-billion dollar industry, serving up plenty of options to “torch fat” and “melt the pounds away”. Marketed as a metabolism thermodynamic to cut weight, Nubreed Metadyne joins the fold as a fat-burner in either pill or powder form. As all weight loss supplements come with mixed reviews, we decided to take a look at this one for ourselves

Nubreed as a whole sells clean supplements based on a lifestyle of nutrition. Their tagline – being “ALL IN” – follows that ethos. As an Informed Choice brand, their existing products have to pass rigorous testing. (We did find a warning letter from the FDA for one of their supplements, however, but it wasn’t about Metadyne.)

Metadyne combines natural ingredients to elevate energy metabolism and central nervous system activity. Theoretically, this blend can help you burn fat. Unfortunately, some of it is still proprietary, so we can’t get a gauge on exactly how much of each ingredient is included. Still, we’ll go over the supplement facts below.

The supplement facts in each serving of the Metadyne are as follows, in pill/powder forms respectively:

Citrulline is a naturally-occuring amino acid within the human body. One of its many uses is to produce arginine, another amino acid that helps with blood flow and protein synthesis. Therefore, supplemental citrulline indirectly stimulates circulation both to and from working muscles, as well as signalling muscular growth. L-tartrate adds a salt to improve absorption, and on its own is a potential antioxidant.

Of interest is citrulline’s particular effects during caloric restriction. As this is a fat-burning supplement, one can surmise the two would go hand-in-hand. When researchers gave citrulline to calorie-restricted rats, citrulline was able to restore otherwise diminished rates of protein synthesis. Basically, it helped them burn calories while keeping muscle. Enjoy that mental image of tiny little jacked rats.

As a blend of L-aspartic acid, N-Methyl DL Aspartic Acid, theanine, and Lion’s mane extract, Alpha EXA targets NMDA receptors in the brain. NMDA actually stands for N-methyl-D-aspartate, and its chemical similarity to glutamate makes a perfect substitute for the neurotransmitter. Due to the makeup of the first two ingredients, they can activate glutamate receptors to signal nerve growth.

Theanine has been shown to increase brain-derived neurotrophic factor and reduce cortisol levels, triggering antipsychotic and antidepressant effects. These effects were in the 400mg range on patients with schizophrenia, or in rats, so it’s tough to say whether its dosed appropriately for health humans here. Lion’s mane mushroom, also stimulating nerve growth factor, can help rewire the brain for neuroplasticity and fight depression.

While all of these are fantastic benefits, we’re not quite sure how they relate to fat loss. In theory, they could help reduce anxiety, improve mood, and elevate thinking for a workout. Which, to be fair, are all positively associated with health. But it’s a stretch to say this blend is a “powerful CNS stimulants”, even though they bind to glutamate receptors.

Now we’re getting to the effects commonly associated with a stimulant. The NRG3 matrix provides a (sigh) proprietary blend of three caffeine compounds – caffeine anhydrous, dicaffeine malate, and caffeine citrate. Because it’s a well-kept secret, we can’t say how much of each you’re getting. The good news is – there’s at least 375mg of some form of caffeine, and the three work together for extended energy.

The performance benefits of caffeine are heavily backed by both science and anyone who drinks coffee.

However, 375 milligrams of this caffeine is like five shots of espresso, if it were partially dehydrated, made more potent, and lasted longer. So, it’s a serious concern for those that have a low tolerance to caffeine (in our honest opinion). We would certainly be avoiding taking this dosage in 1 go…

You might not have heard of methylliberine, but you’ve heard of something like it – caffeine. Both compounds work through blocking adenosine from binding to receptors. When adenosine is free, you feel awake and alert. When it’s locked in to receptors, that signal fatigue and sleepiness.

What’s really interesting is it’s safety. Studies have shown that methtlliberine lacks toxicity in doses up to 700mg/kg/day in rats. While obviously not humans, no adverse effects have come to light in people either. Therefore, Dynamine is a caffeine workaround. You get the sense of alertness without a lot of the jitters.

Gamma-Butyrobetaine ethyl ester HCl, or Alpha GBB, for those of us who don’t like our tongues tied, helps your body create carnitine. You can also get carnitine from red meats and dairy products, but it’s still considered non-essential.

What’s carnitine, you ask? It’s an amino acid that, among other things, helps carry fatty acids into the mitochondria for metabolism. It’s only then that these fat molecules can be oxidized to create ATP.

In a low-carb or fasted situation, this makes sense. Our bodies will reach for blood glucose first when available, so fatty acid oxidation isn’t the prime energy source. However, during extended, low-intensity activity, we utilize fats to conserve carbs for the hard work. So if you’re a) doing some easy cardio or b) training fasted, Alpha GBB could come in handy.

Toothed clubmoss, or Huperzia serrata is a plant native to Asia. Its first uses in Eastern medicine were to improve memory and cognition. Now, we know the culprit – a compound called huperzine A. It works to elevate acetylcholine levels in the brain, uplifting efficiency of transmission across synapses. Medical professionals use it as part of therapy against Alzheimer’s disease, and it’s commonly taken as a nootropic supplement.

How can it help fat loss? Maybe it’ll you remember how many cookies you ate last night, and how to get to the gym the next day. Acetylcholine is particularly important at the neuromuscular junction – where your nerves tell your muscles to contract – so that’s something. But as far as proof it works for weight loss? It’s not really there yet.

Piperine comes from black pepper. Yes, the very same thing you put on your meal. First and foremost, this compound is known for enhancing bioavailability. Basically, it helps you actually absorb the other ingredients when you digest them. Piperine has also been shown to increase thermogenesis, or the heat born from activity. As calories are measures of heat, the more you create, the more you burn. 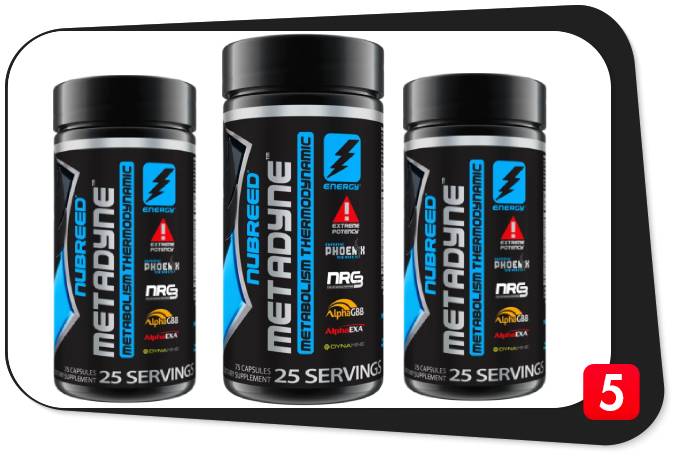 Nubreed Metadyne is an interesting one. With all of the ingredients combined, it’s more of a nootropic supplement than anything. Yet it’s sold as a leaning/cutting agent. How?

Well, you have to understand what happens during a cut. You’re tired. You’re in a bad mood because you’re hungry all of the time. And you feel like you don’t have any energy to train. Considering the real-world factors of weight loss, Nubreed Metadyne could kick you into gear. With a caffeine-like ingredient in Dynamine, it wakes you up from your fog. Toothed clubmoss and Alpha EXA, especially, do the same for cognition. The blend of theanine and NMDA agonists might make you actually want to go to the gym. So with that in mind, it’s a weight loss supplement.

Although caffeine itself is a thermogenic agent, and piperine helps, Metadyne only offers mild advantages over any regular cup of coffee. A standard pre-workout, even, offers the same improved blood flow benefits, and you probably have one of those in your cupboard already. The only real targeted fat-burning is through carnitine and fatty acid oxidation, but that theory hasn’t really worked in research.

In our opinion, Metadyne misses the mark. There are better supplements to take during a cut.

Nubreed’s BCAAs rank on the Informed Choice list, but we didn’t find any certifications with regards to Metadyne.

Fitness competitors or other weight class athletes might take it towards the end of a cut. Anyone looking to improve motivation during weight loss, however, could safely take Metadyne.

Nubreed Metadyne can provide a nice mental and physical energy boost without a ton of negative side effects. It also comes as both a pill and a shake, providing variety. Some of us just don’t like the taste of cotton candy, rainbow fruit, or sour gummy worms. Others avoid pills like the plague. The good news is you’re not restricted.

The only real side effects of taking Nubreed Metadyne include those in caffeine – jitters and rapid heart rate.

Nubreed Metadyne offers a relatively safe weight loss supplement that primarily affects mental energy and mood. If you’re struggling to put in the work, and want a slight boost, Metadyne can help. But it might not be worth the $34.99.

Our #1 recommendation for a fat burner this year is still the same, which you can check out here.