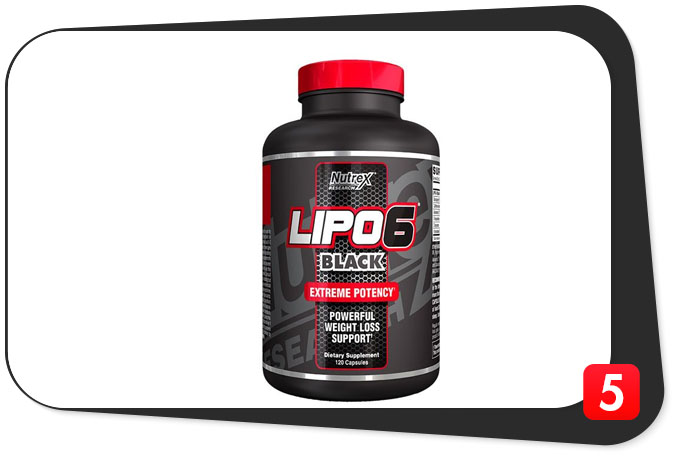 In this Lipo-6 Black review, we ask the burning question: What does it mean when a Fat-Burner formula’s biggest ingredient doesn’t actually burn fat? LIPO-6 BLACK aims to find out. This “Powerful Weight Loss Support” formula puts a heavy emphasis on nootropic nutrition, while fat-burning bio-activities seem secondary.

This six-ingredient blend is powerful, though; made with high-potency ingredient forms. They know it’s strong, too. That’s why they list all dosages. Ultimately LIPO-6 BLACK is a solid formula — but it doesn’t laser-target fat burning, and its amped-up energy isn’t for everyone. Is it right for you? Let’s find out.

LIPO-6 BLACK dosage levels are extremely potent, just as advertised — but not all of its ingredients are fat burners.

Let’s break down the ingredients in this hybrid nootropic/fat burner formula.

This snippet from their website explains how Lipo-6 links nootropic nutrients to fat-burning benefits.

Bacognize is a patented form of bacopa monnieri extract…which just happens to be our #3-ranked nootropic. Bacognize is premium; standardized to supply a minimum 45% of bacosides, which are the active compounds.

That 45% standardization is some serious shizzle; it matches the potency level of Bacopa found in our top-ranked nootropic supplement overall. LIPO-6 BLACK’s big 250 mg dosage of Bacopa is strong and beneficial.

But why is a nootropic the biggest ingredient of this fat-burner complex? They barely mention it in their copy. What they’re claiming is that “better focus” from Bacopa will help your fat-burning efforts. It may also help because Bacopa is an adaptogen that helps the body to fight off the negative effects of stress. If you are working out, super-stimulating and incinerating fat, that is a stressful body state.

Does Bacopa work for fat loss? It is hard to say, since there is little evidence for that purpose. However, Bacopa monnieri is an outstanding brain-booster for memory, especially, and is found in the industry’s greatest nootropic stack supplements for sharp mental performance. At the end of the day, this puzzling ingredient choice for LIPO-6 Black — a fat-burner stack — creates more questions than answers.

We all know about caffeine by now, right? Energy, suppression of appetite, increased metabolic rate – all in all, a good ingredient you definitely want to see in a fat burner. Typically, around 200 mg is an effective dose in fat burners, so the Lipo6 Black dosage is in the right range.

Advantra Z Citrus, a special patented form of bitter orange, supplies synephrine: A popular ingredient in fat burner complexes. It is similar to ephedrine, but less potent… it’s also far safer because it doesn’t affect heart rate or blood pressure. Synephrine is a stimulant that can provide energy while boosting metabolism. It’s often used as an “alternative stimulant” in caffeine-free formulas.

LIPO-6 BLACK already has caffeine 220mg. Stacking the ‘feine with top-shelf, branded synephrine is one hell of a potent combo. It WILL burn fat.

The Advantra Z® in LIPO-6 BLACK is a premium form of the intense fat-burner synephrine, with patented advancements for:

Synephrine, especially in Advantra Z® form, is an intensely aggressive and effective fat-burner ingredient. However, the same intensity that makes it work may create safety concerns you should be aware of.

Nutrex makes no bones about it: Its whole range of LIPO-6 fat loss supplements are designed to be intense. But with that intensity may come some side effects and risks.

Expert researchers in one unbiased in-depth review on the safety of caffeine suggests that caffeine and synephrine appear to have synergistic effects on the cardiovascular system, especially blood pressure.

Lipo-6 Black supplies Advantra Z® Citrus Aurantium (50% p-Synephrine) at a total dosage of 40 mg, which means its 20 mg of synephrine is at the very low end dosage-wise that has been associated with blood pressure concerns.

However, Advantra Z® is also supposed to be an advanced form of bitter orange synephrine that reduces or eliminates side effects related to high blood pressure.

The take-home message: Take care with LIPO-6 Black, especially if you have blood pressure issues or cardiovascular health concerns. This is not a fat burner for beginners.

Our #4-ranked Best Nootropic, Vinpocetine boosts brainpower, but burns ZERO fat–continuing the Lipo6 strategy of “fat burning via mental performance.” Let’s consider it again. Aaaaaannnnd…. nope. It still makes no sense to us. But as a nootropic, vinpocetine makes a hell of a lot of sense.

Zingerone is what makes ginger so potent. And YES, it is a mild fat burner! It helps with digestion and appetite suppression too, offering more weight loss support. Dosage looks small, but keep in mind this isn’t ginger–it’s ginger’s active compound, only. 10 mg is a good dosage, and a decent ingredient choice for this formula.

This stimulant-driven fat-burner ingredient is especially potent when stacked with caffeine. It has several benefits. In addition to improving blood flow, it may help you lose fat from stubborn areas: Love handles and lower back. It could be useful in helping you to burn off belly fat as well. Like the Zingerone, Yohimbine is an active compound that’s been isolated from a whole herb. So 4.5 mg may look small, but it’s actually a really powerful, potent dose for fat burning.

In this Lipo-6 Black review, we give immediate kudos to Nutrex’s use of high-quality and effective ingredients: Branded forms like Bacognize and Advantra Z; isolated active compounds like Zingerone and Yohimbine. Really, they do an awesome job of hitting high-potency dosages of these ingredients; dosages that will WORK.

But the downside is, potent Advantra Z® synephrine+caffeine might be too much “metabolic intensity” for some people to handle, in other words… “Ramped-up, stark-raving MAN-BEAST” mode.

Yohimbine will burn fat too, and make these feelings even more intense. We like the use of Gingerone as a mild fat-burner with complementary bio-activities for weight loss in general.

The strategy of LIPO-6 Black seems about 60% fat-burning, 40% brain-boosting. The nootropic emphasis might not appeal to people who are only interested in burning fat via more standard fat-burner supplement strategies.

LIPO-6 BLACK is a super-stimulating fat-burner.

What is interesting about it is that it seems to use nootropic brain boosters and premium branded nutrient forms to deliver all that fat-burning stimulation in a supplement that is easier to take. LIPO-6 BLACK’s ingredient potencies and forms are quality; this formula is made to work. Its nootropic side may help to improve workout focus to help you get more out of your training session.

And, since Bacopa monnieri is an adaptogen herb, it might help to maintain your physiological balance while LIPO-6 BLACK’s potent fat burners are unleashing peak metabolic effects. However, we must point out that a nootropic like L-Theanine is far more evidence-backed for reducing the jitters that sometimes accompany caffeine intake.

As a “brainpower+fat-burning” formula, LIPO-6 BLACK is streamlined, efficient, and super-intense. However, if you want a straight-up fat-burner with no brainpower support, there are other supplements that may interest you more than this one.

5-HTP: An “Appetite Control” Nootropic. One nootropic that DOES help weight loss is 5-HTP. As a nootropic, it promotes relaxation & a good mood. For weight loss, it boosts brain chemicals & digestive nerve-signaling linked to appetite satisfaction. LIPO-6 BLACK’s nootropic/fat burner strategy would make more sense if they used 5-HTP.

Stimulating & metabolism-boosting compounds stacked together have synergy… so Lipo6 Black WILL put some hair on your chest. You may burn extra calories from the jitters alone. As stimulants tend to do, this product may help you eat less food, burn more fat, and sharpen your alertness.

Outside of the “Fat burning” realm, the Bacopa and vinpocetine in LIPO-6 BLACK are great nootropics, so expect cognitive benefits for focus, learning, memory, mood, etc. Sharper cognition may translate to dieting success, so there might be some “fat burning” benefits here, but it’s a stretch.

Bodybuilders and athletes. The formula itself seems tailored for those who see cognitive performance as a key contributor to fat-burning success. It definitely has a “sliced and diced” target; bodybuilders seeking help with the intense focus, self-control and fat-burning, all for the main purpose of getting ripped. Reviews from this crowd seem to give LIPO-6 BLACK decent customer ratings and reviews, for what it’s worth.

Remember that LIPO-6 Black is not really a fat-burner formula for people who are just starting out, due to its intensity. 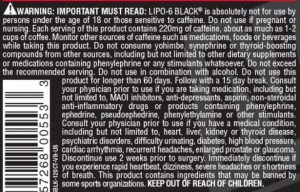 Straight from the Lipo-6 label, a big warning.

This high of a stimulant dose is sure to cause some jitters in those who are sensitive to caffeine, and stimulants in general. These effects would be amplified if taken on an empty stomach. Jitters, elevated blood pressure, increased heart rate, and increased body temperature may occur. If you’re a stim-junkie however, you may not feel a thing, so this will be a very case-by-case type of deal. See the image at right for more on potential Lipo-6 side effects.

Red Flag: The LIPO-6 BLACK label warning says it contains ingredients that “may be banned by some sports organizations.” We think it’s weak of Nutrex to be so vague. Allow us to make it crystal-clear: LIPO-6 BLACK contains synephrine, which is considered a banned substance by the NCAA. Now you know. Tell your friends.

Nutrex is an accessible brand that you can find at several outlets. That means if you shop around, you might find some discounts and sales on this supplement.

LIPO-6 BLACK is extremely powerful fat loss support. Will it help you to lose weight? Due to its potent formula and evidence-backed fat-burners, we say yes, it will probably help you to slim down when taken in combination with diet and exercise.

The X-Factors with LIPO-6 BLACK: This formula uses Bacopa monnieri, one of the greatest brain-boosting nootropic herbs for memory and learning. Bacopa might be helpful for countering stress while losing weight, but it seems theoretical in this regard. Finally, LIPO-6 Black’s caffeine + synephrine is a double edged sword that could incinerate fat at the expense of jitters, super-stimulation and blood pressure concerns. Proceed with caution and take LIPO-6 BLACK under a doctor’s direction if you have any concerns about these possible side effects.

Read other B5 reviews of Nutrex fat-burning products in the LIPO-6 family:

*Note: This Best5 LIPO-6 Black Review was updated in December of 2017 with additional information, links and references, including new details on possible synephrine-caffeine interactions.