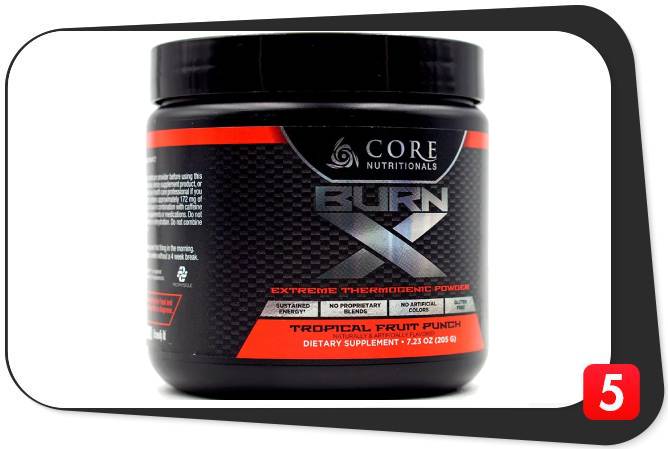 By adding some substances, removing others, they’re working hard on creating the ultimate dietary supplement for weight control.

Let’s learn whether their newest fat burner hits the mark or falls short.

The ingredients included in Core Burn X include:

Calcium is a key component to overall health. It provides a variety of benefits including the formation of bone and teeth, maintenance and movement of muscles, blood circulation, and nervous system function. Calcium contributes heavily to day-to-day operations within the body. Any excess calcium ingested goes straight through the digestive tract – so you don’t have to worry about intaking too much of it.

L-Carnitine is an amino acid that is heavily involved in metabolism. In a nutshell, L-Carnitine helps transport fatty acids into mitochondria. When fatty acids enter the mitochondria, they get oxidized, producing energy. Acetyl-L-Carnitine is a variation of L-Carnitine (but they can easily interchange). The addition of an acetyl group to L-Carnitine facilitates transport across borders within the body, such as intestinal and stomach lining and the blood brain barrier. Therefore, acetyl-l-carnitine is more effective. This variation of carnitine helps with weight management because of its impact on metabolism.

Ashwagandha is an Indian herb that has been used in traditional medicine for many millennia. It has many bioactive compounds that elevate brain function. Ingestion can help reduce cortisol levels. Cortisol is one of the most important molecules associated with stress and anxiety – high levels of cortisol are typically associated with stressful situations such as intense exercise or danger. Therefore, ashwagandha extract can help reduce susceptibility to these triggers, allowing you to react appropriately and succeed despite circumstances.

This extract actually comes from a fruit cultivated in Southeast Asia, India, and Central Africa. Also known as brindleberry, this yellowish-green fruit has gained a lot of attention in recent years because of its supposed weight loss properties. While there is no hard scientific evidence supporting this idea, many amateurs believe in its power to contribute to weight management. Scientific evidence does prove its toxic effect when ingested by humans, however. Precaution when ingesting it is necessary.

Ever heard of green coffee? Me neither. As it turns, it’s not your morning cup of joe with some food coloring. Instead, it’s coffee beans that haven’t yet been roasted. Simple as that. Again, green coffee is thought to have beneficial weight loss properties. While the evidence for this claim is weak, it’s assumed that a substance in green coffee called chlorogenic acid may help with weight loss by promoting metabolism. Green coffee extract also obviously contains caffeine, a common stimulant.

If you’re wondering, Yerba Mate is a plant that originates from South America that has been used by humans for many centuries. Yerba Mate contains compounds known as polyphenols. These compounds affect fat metabolism by prohibiting fat-processing enzymes, reducing the overall absorption of fats. Yerba Mate also can reduce appetite by slowing down the rate of gastric emptying.

Some studies have linked the ingestion of hot Yerba Mate to various cancers, but more research is warranted on this topic.

This is naturally derived from the cacao bean. Cocoa extract is thought to have many beneficial characteristics. It contains flavonoids which, in short, help improve blood flow and reduce blood pressure by widening blood vessels. Its caffeine content can also improve cognition. While not necessarily fat-burning, better blood flow and focus could yield better workouts.

This is just caffeine that isn’t diluted in water (or any other ingredient, for that matter). Rather, it comes purely in a dehydrated powder form. Derived from caffeine-rich plants such as coffee, tea, and cacao, this form of caffeine is universally known to enhance alertness and benefit exercise performance. However, it’s not without risks. Too much caffeine can lead to insomnia, anxiety, an upset stomach, and more.

Bacopa Monnieri is another plant that has been used in Ayurvedic medicine. Traditional medicine used the plant to help improve memory and overall cognition. While there is little scientific research that supports this claim, there is some preliminary evidence in its favor. Like many other medicinal plants, exercise caution when ingesting Bacopa monnieri as it has many side effects such as nausea and other intestinal issues like spasms and paralysis.

This product uses a patented technology to release caffeine in increments. As we all know, caffeine is a stimulant that can help with alertness and exercise performance. Züm-XR caffeine extract allows the ingested caffeine to not be processed all at once in the body. Rather, the caffeine becomes progressively accessible, providing longer, more sustained energy. Züm-XR advocates argue that it prevents the dreaded caffeine rush stereotypical of consuming a relatively large amount of caffeine at once.

Saffron is the most expensive spice in the market. It’s notably used in Arabic and Indian food, as it brings a colorful touch to cuisine. Despite its addition to the culinary arts, saffron has also been used as herbal medicine for thousands of years. It’s a strong antioxidant that can increase satiety, reduce depressive feelings, and moderate anxiety. Unfortunately, the science isn’t conclusive definite for this claim, but nonetheless, it’s possible. 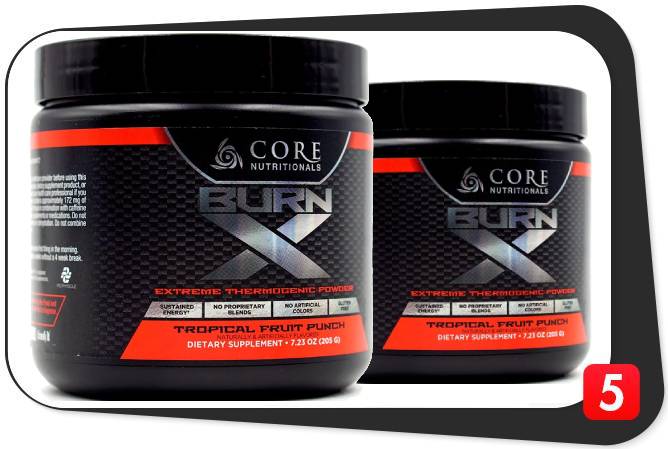 Core Burn X features a lot of natural ingredients, which is always a plus. It’s inclusion of caffeine stimulates both thermogenesis as well as energy for exercise. Acetyl-L-Carnitine levels make sense, but only in instances of deficiency or impaired metabolism. Yerba mate is a surprise inclusion that may in fact work, but mostly as an appetite suppressant. And let’s be honest – most of the struggle behind weight loss is hunger.

The inclusion of Garcinia Cambogia is concerning, but amounts are low enough to avoid toxicity in adult humans. Honestly, it seems like Core Burn X’s best qualities are controlling mood, cognition, and hunger. Which isn’t a bad thing. It might not immediately torch fat, but it can help you stick to your weight loss goals, which is always a plus.

As of this writing, technically no one. Core Burn X is expected to drop in early October, so be on the lookout. Core Nutritionals, however, targets the bodybuilding community. So it’s safe to say the same population will be after their newest release.

Core Burn X has many ingredients that are thought to have hunger suppression properties which can have direct weight management benefits simply by helping you eat less calories. Many ingredients also may have fat metabolism characteristics that can slow down the rate at which fat is processed within the body. Ingredients like caffeine can also be helpful to promote effective training sessions in order to burn more fat and calories.

Any Potential Side Effects with Core Burn X?

While the ingredients are all natural, there are a handful of serious side effects that may results from Core Burn X. The main ones being nausea and anxiety. This combination of nutrients can also cause restlessness and more serious intestinal symptoms such as intestinal motility (spasms and paralysis). Watch out for the amount you take – too much of some of these ingredients has been claimed to lead to certain types of cancer.

The previous version of Core Burn X, Core Burn, is out on the market at $49.99 online and $69.99 in retail. Expect a similar, if not higher, price for the updated version.

Core Burn X seems relatively innocuous – it won’t necessarily help or hurt. While you might get a few benefits from the caffeine content, you’re better off eating real, whole, clean food and training hard.

However, as this product is directed towards the bodybuilding community, we understand you’re on a strict diet. If you need to lose a few extra stubborn millimeters on your skinfolds, you’re better off with other supplements. Choose a supplement that facilitates weight loss during fasted training, as you’re probably facing that on your road to competition.