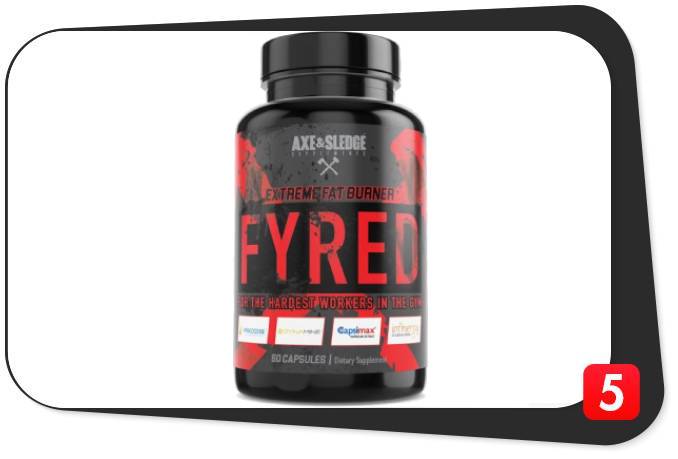 Fat loss supplements have a bit of a mixed reputation in the fitness world; there are some who swear by them while there are others who swear at them! Are they effective or a waste of money?

The answer is that it depends.

Secondly, it depends on what product you are looking at. Not all fat burners are equal and using the right product could drastically change your opinion on fat burners.

In this review we are going to be looking at a fat burning supplement … ahem! A weight loss support supplement (because the industry now shies away from calling them fat burners) called Fyred which is sold by Axe and Sledge.

We will take a look through the ingredients list, assess any claims made, and use science to prove or disprove them.

Hopefully, by the end of the article you will have decided whether Fyred by Axe and Sledge is worth spending money on or not.

About Fyred by Axe and Sledge

Axe and Sledge appears to be a fairly new company based in Pittsburgh, PA. Sadly, that is all that 30 minutes of dedicated research has got us.

The company are seemingly reluctant to divulge any information that may be of use.

This is definitely an annoying supplement industry tactic, we’re not sure why, but almost all small supplement companies make you play detective to find out anything about them. There’s nothing particularly suspicious about doing this, it’s just annoying.

Fyred is labelled as an extreme fat burner on the label, but all the marketing materials describe it as a weight loss support supplement. Axe and Sledge also claim that it can boost your metabolism, promote energy, and increase mental clarity and focus.

Axe and Sledge Fyred Directions for Use

As with a lot of fat burners and pre-workout supplements, Axe and Sledge recommend that you first assess your tolerance to the supplement before taking the full dosage. This is sensible, as if you’ve never taken a high-caffeine product before you may be unpleasantly surprised! So, for the first few days you should take just one capsule with 8-10 ounces of water.

Once you have assessed your tolerance you can increase the dosage to the recommended level, this would be two capsules per day with no more than four capsules taken within 24 hours.

Axe and Sledge advise that you should not take Fyred within four hours of your bedtime. This is due to caffeine being a stimulant which takes a long time to clear your system.

We are now going to take an in-depth look at each of the main ingredients, assess whether the ingredient is correctly dosed and whether it works or not.

Green coffee extract is one of the most controversial ingredients around. Once touted as a fat loss miracle drug, it is now seen as a scam ingredient that has no effects. One of the issues with green coffee extract (and this actually affects hundreds of ingredients) is that there just hasn’t been that many studies that have been performed on it. This means it is really difficult to definitively say whether it works or not.

A couple of studies have found it to have a modest effect on fat loss [1][2], but there have also been numerous studies that found no effect. As of right now we’d say that this is probably a dud ingredient, though there is the possibility that it may work.

The thing is, caffeine is an excellent fat burning ingredient and will boost your metabolism as well as improving mental focus. However, there is a caveat. The more caffeine you consume daily, the less effective it will be. This is because your body builds up a tolerance to it.

If you rarely (or never) consume caffeine, then 150mg of caffeine could well help to increase your metabolism and increase fat oxidation. If you drink coffee or tea regularly or have been taking supplements that are high in caffeine for a while, then this caffeine will do absolutely nothing for you.

This is a big deal, because make no mistake, the caffeine content of Fyred is the main active ingredient. To be clear, caffeine is a fantastic supplement ingredient with many benefits. We’re not having a go, just pointing out that anybody who regularly consumes caffeine may not see any fat loss or metabolic benefits.

Also, 150mg is under-dosed as 200mg is the optimal amount for fat-burning.

As a fat burning ingredient Ginkgo is completely useless, but we suspect that it was added to improve cognition. However, ginkgo has only been associated with cognitive improvements in the elderly and appears to have no affect on cognition in young or middle-aged people.

A 2012 study found that taking ginkgo biloba led to a reduction in cognitive decline in people over 50 years of age who had been diagnosed with mild to moderate dementia [3]. Unless you are elderly or suffering from dementia, it is unlikely that gingko biloba is going to be of any use.

The sentence “absolutely nothing special” springs to mind here. Juniper berry extract has been shown to have very weak anti-obesity properties when fed to rats in one study [4]. But that’s about it.

Methylliberine is a compound that can be found in coffee beans, yerba mate, and guarana. It is structurally similar to caffeine and works in a similar way (it also works really well when taken in combination with caffeine as it is in Fyred).

This is the first ingredient that has made us sit up and take Fyred seriously. Like caffeine it should increase focus, improve your performance in the gym, and enhance mood.

However, like caffeine it is thought to work by inhibiting adenosine receptors. Which means that if you have been taking a lot of caffeine before, then Methylliberine may not be that effective.

Why Axe and Sledge have included dandelion extract in this supplement we may never know. It has no real benefits and may even be a hindrance due to its diuretic properties. Eating dandelion can increase your potassium levels a bit … but that doesn’t really help with fat loss.

All we can think is that the diuretic properties may lead to a loss in water which may help you look leaner temporarily. But that seems too ridiculous.

According to WebMD, Buchu is a plant in South Africa that does not appear to have any proven benefits [5]. Another completely irrelevant ingredient!

Cayenne peppers are a source of capsaicin, a molecule that is responsible for making hot food HOT. The molecule leads to the release of adrenaline and can increase your metabolic rate as well as fat oxidation. A 2007 study found that healthy men who took capsaicin before exercising saw an increase in fat oxidation compared to the placebo group [6].

Sold by Creative Compounds as Infinergy, dicaffeine malate is a combination of caffeine and malic acid. It works in the same way but is supposed to affect the digestive system less. A clever ingredient that is affected by day to day caffeine intake in the same way that Methylliberine and caffeine are.

An ingredient that is similar in structure to ginger, grains of paradise is a common food in West Africa and has found popularity in the Caribbean. There appears to be some evidence that grains of paradise extract may help to increase your metabolism slightly [7].

After analyzing the ingredients, we can come to the following conclusion: Fyred will work very well for people who have a low tolerance to caffeine. Perhaps too well!

When you look at all of the ingredients that affect adenosine receptors (caffeine, dicaffeine malate, and Methylliberine) it feels like this supplement is going to lead to a massive increase in adrenaline and metabolism.

But if you are already consuming a lot of caffeine and have been for a while then this supplement may fall flat on its face. That’s the problem with supplements that rely too heavily on caffeine, and Fyred is definitely guilty of that.

There are some clever ingredients present in Fyred. GBB is effective at increasing l-carnitine production; cayenne pepper extract can boost your metabolism; caffeine, dicaffeine malate, and Methylliberine can also increase fat burning and boost your metabolism. You should also see an increase in cognition and a banishment of fatigue. But the supplement will only work if you don’t take too much caffeine normally, and it will have diminishing returns the longer you take it.

The entire Axe and Sledge product line is exclusively aimed at young men, preferably with large beards and a desire for large ‘guns’ (the muscles, not necessarily the other type). Seriously, check out their social media pages! Read their “About section”. That does not mean that these products won’t work for anyone though, it’s just the specific niche they are aiming at.

Any Potential Side Effects with Axe and Sledge Fyred?

Almost all of the side effects would be a result of the caffeine content. Nausea, headaches, jitteriness, upset stomach, insomnia, and high blood pressure, are all potential side effects. But that doesn’t mean that any of these side effects are guaranteed.

Axe and Sledge Fyred Price and Where to Buy

Fyred costs $49.99 from the official website, a premium price point that seems a little high for what is mainly just an adequate product.

The problem with any fat-burner is that they are a victim of people’s expectations, this is partly the fault of the supplement industry itself. For decades fitness influencers (bodybuilders, fitness models, and now Instagram models) have pushed fat burners as a way to lose substantial body fat without having to do any work.

This misinformation has led the general public to believe that if they can handle the unpleasant side effects of fat burners their results will be amazing. Sadly, no fat burner works like that. At best, a legal fat burner is going to contribute 1-5% of the fat loss, while diet, exercise, and lifestyle change (sleeping more, stress management, bad eating habits etc.) will contribute 95%.

If you are a bodybuilder who is cutting down to the lowest body fat percentage possible then a fat burner is a great choice. Also, if you are very obese then a fat burner can actually make a difference. Anyone in between though may be unsatisfied with the results.

Fyred itself is a perfectly adequate fat burner, and there are some clever ingredients added here. Sadly, the product is also stuffed full of useless ingredients that serve no purpose but make the ingredients list appear to be better than it is. This fat burner will do a job, and that’s about it.