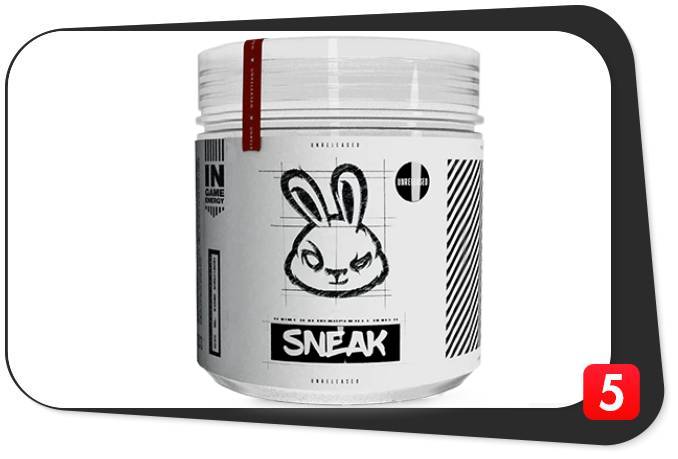 The energy drink game is hard to crack. With the popularity of Red Bull, Monster, and good, old-fashioned espresso, smaller brands struggle to make their voices heard. That’s why we’re excited to cover Sneak.

They’ve designed their energy drink for a specific population, carving out their niche with clothing and other merch as well.

Sneak Unreleased is the company’s original energy supplement for gamers.

But it could have something to do with their self-proclaimed “indescribable” flavor. Rumor has it that they created this product first, but weren’t sure how it would go down.

But now, after a bit of proven success, Unreleased is no longer… unreleased. 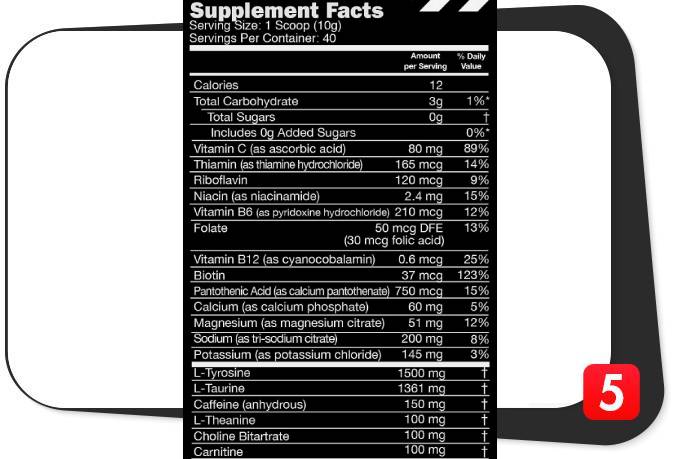 Not only a crucial vitamin to fight illness, vitamin C works as an antioxidant to protect your brain. As exercise and stress cause high oxidation, adequate levels of this nutrient works in your favor. Vitamin C is also involved in catecholamine synthesis, providing a cofactor for reactions that produce glutamate, dopamine, acetylcholine and GABA. Thus, we need vitamin C for overall nervous system health, muscle contraction, sleep, tissue growth, and more.

Thiamine, also known as Vitamin B1, is one of the B vitamins involved in energy metabolism. Thus, it makes sense in this formula. However, much like the other vitamins – it won’t give you an energy rush in itself. Rather, its presence assures you can produce energy on your own. Especially in the nervous system, adequate thiamine helps your body do what it’s made to do naturally.

Riboflavin (Vitamin B2) acts similarly to its cousin thiamine. As a cofactor in fatty acid metabolism, it helps with energy production. During low-intensity endurance activity, the body uses fat as its primary fuel source.

Niacin is a big ingredient in pre-workouts and energy drinks. It plays a role in creating NAD and NADP, two coenzymes in aerobic and anaerobic cellular respiration. Without these molecules, your body would miss critical steps in ATP production, and you’d become seriously energy deficient.

But buyer be wary – too much niacin can cause unwanted tingling and skin flush. So watch out if you’re sensitive.

Vitamin B6 is involved in red blood cell health and generation. It’s ability to increase red blood cell count and help iron metabolism contribute to oxygen delivery. If you think about it, you yawn when your brain needs oxygen. Help it out with some B6.

Folate and vitamin B12

Folate is another B vitamin essential to maintain neurological function. This (vitamin B9) and vitamin B12 work together to contribute to the proper functioning of the hippocampus, maintenance of cell membrane and the repair of neurons. You’ve probably heard of folate as a recommended supplement for pregnant women. That’s because it helps babies’ brains develop properly. Even into adulthood, it’s imperative that folate intake meet daily requirements to assure proper brain function. Failure to do so could result in ineffective delivery of energy to the brain, amongst other negative effects.

Vitamin B12, on the other hand, helps synthesize DNA and regulate metabolism. As discussed, its role in nervous system health promotes the benefits of folate. However, it also teams up with vitamin B6 to catalyze fat and protein metabolism.

Biotin, also known as vitamin B7, is typically associated with skin, nail, and hair health. It’s critical to fatty acid and amino acid synthesis, specifically BCAAs. Biotin has also been proven to stimulate insulin and fight neuropathy in diabetic patients.

Pantothenic acid, or vitamin B6, helps create coenzyme A, a critical part of energy metabolism. Much like it’s other vitamin counterparts, however, it’s already formed within the body.

Both calcium and magnesium are involved in muscular contraction. Calcium represents an important electrolyte to keep you going during sweat-inducing work. By changing the shape of binding sites within muscles, calcium opens up space for contraction. Therefore, adding calcium helps facilitate muscular endurance during prolonged periods of stress.

Magnesium, on the other hand, helps muscles relax. That’s why it’s so important to limit muscular cramps. It blocks calcium when called upon, therefore stopping the contraction initiated by calcium in the first place. The two work in tandem to start and stop muscle contractions as guided by the brain. Athletes and gamers alike need this coordinated muscular control for reaction time and motor skills.

Sodium and potassium are also vital electrolytes involved in neuronal excitation and inhibition. Similar to magnesium and calcium, these two work together. By pumping sodium and potassium in and out of cells, an electrochemical gradient is created to transmit signals across neurons. These transmissions allow us to both sense and respond to external stimuli.

L-tyrosine is an amino acid produced within the body from phenylalanine. Once formed, it can create catecholamines, neurotransmitters that signal a state of alertness. As such, it can help increase focus and streamline neuronal communication. Research shows that tyrosine supplementation affects proactive behavior inhibition, especially in older adults. In tyrosine deficient populations, supplementation improved cognition regardless of age. Its most promising benefit, however, is its ability to fight cognitive decline during periods of high stress, such as intense exercise, cold, and altitude.

Taurine helps regulate GABA activity to block distractions and increase focus. It’s assumed to act as a sort of intermediary between your brain stem and areas of executive function. That way, it helps you make tactical decisions about how to respond to your environment. Interestingly enough, some research suggests it’s actually a sedative. While it can help you pull back from impulsive decisions, it might lull you to sleep as well.

We shouldn’t have to tell you about caffeine. It remains one of the most widely-used stimulating substances to this day. Regardless, there’s tons of research on how it can enhance performance, both by central nervous system stimulation and promoting intense activity. In too high of a dose, however, many report feeling jittery and experiencing a rapid heart rate. Fortunately, these effects can be balanced out by taurine (above) and theanine (below).

Theanine literally rewires your brain circuitry. Technically, it modulates alpha brainwaves to trigger calm, focused thought rather than wild, out-of-control reactions. It’s assumed to do so through its effects on GABA, serotonin, and dopamine. Studies also show that combining theanine with caffeine elevates cognition and alertness. On its own, however, theanine actually slows reaction time. So you need a good balance of both in a pre-workout or nootropic supplement.

Choline bitartrate adds a salt to choline for better absorption. More choline reserves lead to better production of acetylcholine, phosphatidylcholine, and other important molecules within the brain. Acetylcholine directly stimulates the neuromuscular junction, telling your muscles to contract or relax. Phosphatidylcholine, on the other hand, forms the structural membranes of neurons. Without adequate choline, you can’t produce either, limiting function.

Carnitine is a non-essential amino acid, which means your body can make it from lysine and methionine. As long as you get enough of those two amino acids in your diet, carnitine levels will be fine. Deficiency is a different story. Studies show that multiple patients suffering from neuropathic pain lacked adequate carnitine. Research shows that supplementary carnitine can fight age-related decline, even in non-deficient subjects. So if you’re an older gamer, it’s something to note. 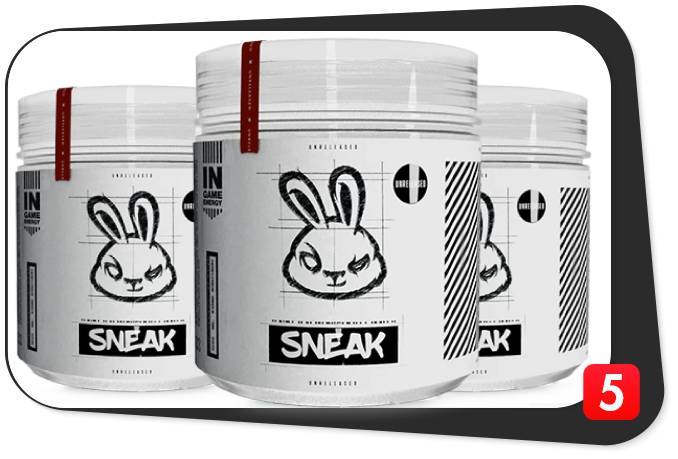 At first glance, this product reads like a multivitamin. Energy supplements love to add b-vitamins, as they’re necessary to create energy from protein, fat, and carb metabolism. Sneak is chock full of minerals as well. As long, extended gaming and high-intensity exercise can deplete electrolytes, Sneak does well to include those. However, the other vitamins are better as part of a balanced diet instead of a pre-workout.

The other evidence-based ingredients in Sneak caffeine, theanine, and taurine. The caffeine here is a bit low for performance, however, as most research recommends at least 3mg/kg of body weight. Similarly, carnitine is underdosed for any direct performance-enhancing benefits. The good news, however, is that Sneak avoids dangerous ingredients, making it generally safe to take.

The Sneak brand primarily caters to competitive gamers as an alternative to other energy drinks. However, plenty take it for energy as a pre-workout.

Sneak provides a balance of vitamins and minerals required for energy and activity. It can also help you achieve the sort of relaxed stimulation you want for mental performance.

Any Potential Side Effects with Sneak Unreleased?

Not many of the ingredients featured have negative side effects at their dosages. However, those sensitive to caffeine might experience jitters or elevated heart rate. Niacin is also associated with paraesthesia, or tingling of the skin.

Sneak Unreleased Price & Where to Buy

You can purchase Sneak Unreleased from the company’s website at $39.99 per tub.

To be honest, the “unreleased” flavor is brilliant marketing. We’re more interested in this brand simply to learn what it tastes like. For those interested in a well-rounded, safe energy boost, Sneak fits the bill. But if you’re already tied to your favorite brand, there’s no reason to throw it away.