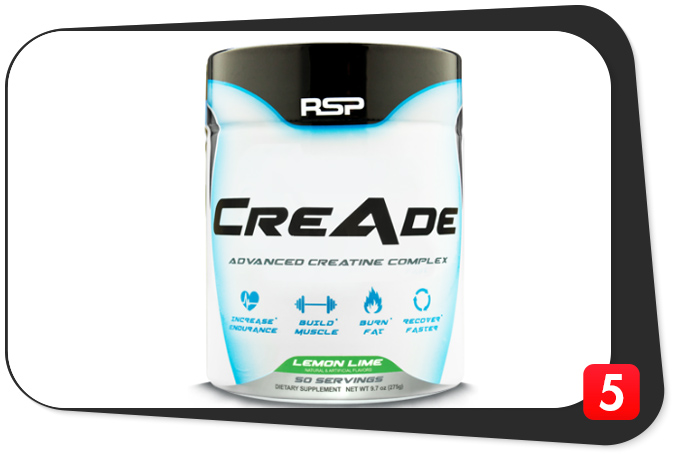 The one problem with your typical creatine powder is the solubility and absorption.

More often than not, these factors make it hard for the user to not just stir or dissolve the darn thing but it can also bloat them until they vomit. One way to circumvent that is to ingest encapsulated creatine but no one likes the idea of popping pills like a druggie specially if you have to swallow more than a handful each session.

RSP Nutrition seems to have answered the problem differently with CREADE, a creatine complex powered by five forms of creatine and something called a “transport matrix”.

Will CREADE live up to its really cool and smooth sounding name? Let’s find out!

CREADE’s main selling point is its solubility and absorption thru a micronized creatine complex which is further augmented by having a thoughtful transport matrix. Premium ingredients, thoughtful blends, and a really cool name and design, we like how everything looks so far but we’ll see if our optimism holds. Formula notes:

CREADE’s formula lets creatine go into your muscles and makes it stay there.

Tradition says we need to load up on creatine before we even start to feel it working and it’s because of how it’s poorly absorbed by the muscles. From the looks of the formula, CREADE not only made use of fast-absorbing creatine forms but have gone the extra mile with their transport blend. Let’s break down the ingredients in this formula:

RSP Nutrition CREADE’s approach is mainly to use the most bioavailable forms of creatine available and then amplify the effect with a scientifically-backed creatine booster complex.

Safe to say, that approach just kills it. We’ve known creatine as a staple ingredient but also an ingredient that is difficult to use but from how CREADE does it, we’re actually thinking their approach is one of the best we’ve seen.

It’s also helpful how simple the formula is. A simple formula means your ingredients will work together in the most efficient way possible. No delays, no bumps in the road.

The only possible flaw we see here is the dosage used for both blends. CREADE prop’d them on their label so we’re left wondering if their transport matrix works the way it should.

For now, we’re giving it the benefit of the doubt since we saw how intuitive their formula is and how the research behind each ingredient (well, except for one) clearly manifests itself in the best way possible.

Fast absorbing creatine, reduced or practically no bloats, and improved endurance and performance. In other words, you got some awesome sports nutrition support for fitness and training, whether it’s daily bodybuilding or weekend warrior sessions. According to some online reviews, that lemon lime flavor is pretty damn good too.

This is definitely for veteran users and real bodybuilders, since the formula itself is not exactly standard or traditional and newbs usually go for the “safe ones” before they try anything new.

Your mileage may vary but creatine is known to promote bloating specially in high doses. We’re not sure how high is high for each person but just keep that in mind so you won’t be bothered why you threw up before you even started lifting.

RSP Nutrition CREADE is a simple yet intelligent creatine blend. It’s focused on quickly absorbing the creatine as well as promoting the body’s natural creatine production. Two birds with one stone, folks. From the looks of things, this may be one of the best we’ve reviewed yet. The only downside is the price but hey, if you know it works then it’s worth every cent.