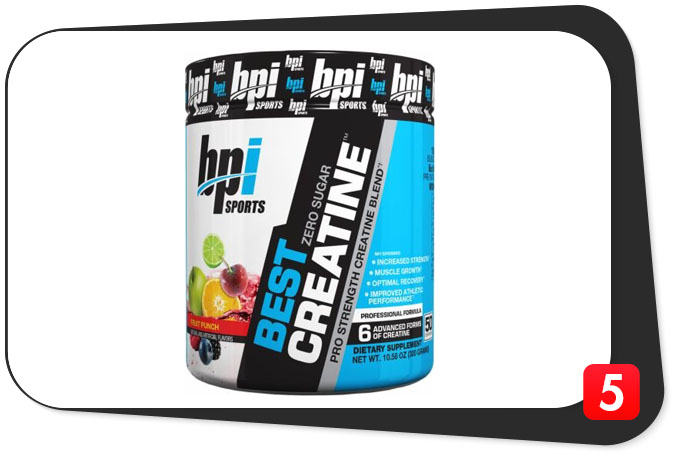 There are many forms of creatine to choose from, each with their own set of perks and drawbacks. We so far know at least eleven forms. What if you combined half of them in one creatine super mix? It sounds like a good idea, doesn’t it?

Well, you’re not alone. BPI Sports seems to think a cumulative team effort is better than a potent standalone creatine build and they did this through their self-proclaimed BEST CREATINE.

BEST CREATINE made use of six forms of creatine so there is quantity but is there quality? Let’s go check it out!

We delight in the fact that Best Creatine has the six popular forms of creatine we often see separately on other blends. They claimed those six as the top forms so looks like the word BEST in the name is not just cheesy marketing. Formula notes:

Six forms of creatine is not really six times better than one.

BPI Sports BEST CREATINE is on its best intentions when it incorporated six really well-known forms of creatine but we don’t really see this form to be as good as it sounds. Let’s break down the ingredients in this formula:

BPI Sports approach to a creatine complex is creative but not really much better than single-Creatine blends in the context of performance and gains.

For one, the use of all six means you only get a small portion of each form’s perks and who can say small portions works just as well than if they were given more dosage? We’re also talking about fitting all six forms under four grams and it’s in a prop blend so we don’t know which form dominates the other.

Studies also use mostly single-creatine forms and as far as we’re concerned, we don’t know if there was ever a study highlighting the use of multiple forms at once and its results. So yeah, you can have the usual creatine benefits but we’re not so sure if the other perks are also included in the mix.

Betaine is a great addition to any supplement and more so in a creatine blend. Most studies make use of betaine in doses above two grams for its performance benefits but we think 500 mg is good enough for it to help the body make its own creatine.

We’re not sure what to think of Himalayan Pink Salt. Some say it has good amounts of trace minerals which are supposedly healthy for you, at least more than regular table salt. The thing is, what do you actually need salt for in a creatine blend? Surely you’re not after the trace minerals but the electrolytes, right?

We think adding Himalayan Pink Salt is just a marketing gimmick, maybe one of the marketing guys read some natural-freak’s blog on Himalayan Salt and decided to use the name as a way to attract the Paleo guys or some other natural-health freak.

It’s more likely marketed to those who are already in the maintenance phase of creatine intake specially since the directions indicate a one serving per day recommendation.

Bloating is probably an issue specially since you got six forms competing for water.

BPI Sports Best Creatine is pretty innovative. Combining six popular forms of creatine is a good idea but we just don’t have enough evidence to justify six forms in one functions better than a single-creatine formula. It also makes the formula a tad more expensive per gram and each penny matters when it comes to supplements we literally have to take on a daily basis.